The International Council of the International Society for Human Rights (ISHR) elected Dr. Thomas Schirrmacher, Ambassador for Human Rights of the World Evangelical Alliance and renowned German human rights activist, as its new president at its two-day session in Bonn, Germany. The ISHR seeks to promote international understanding and tolerance in all areas of culture and society and has active branches or working groups in 37 countries on all continents.

He said that Zakhidov is the living evidence of the fact that many national sections of the ISHR grew out of illegal underground organizations in the era of the Soviet Union and were founded in the follow up states of the Soviet Union after 1990. As a human rights activist who has been active and suffering under communism and is still active in a country where it is not without danger to speak up for all human rights, Zakhidov is a fitting representative for ISHR. 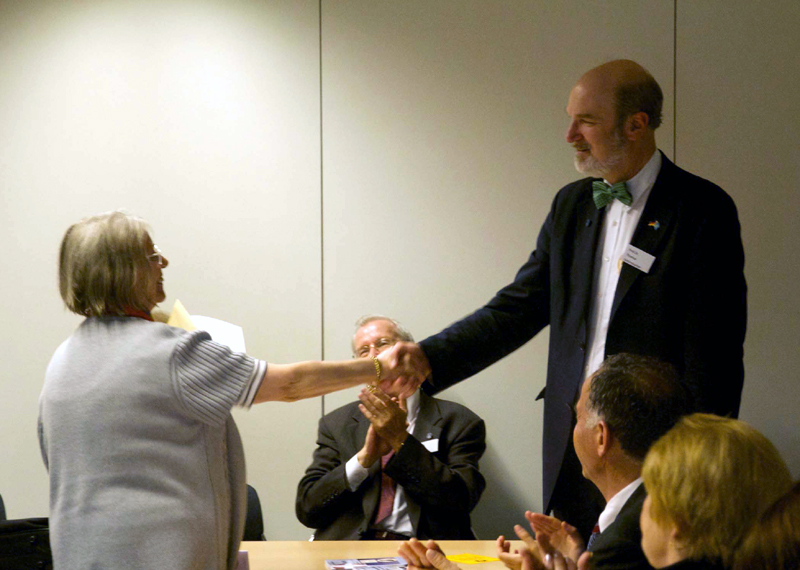 Henriette Baronin de Payreburne (left), treasurer of ISHR, announced the unanimous election result and was the first to congratulate Schirrmacher.

The International Council is made up of representatives of the national sections. The term of office is four years, with the current term running 2012-2016. Thus, the term of the new president and all other board members runs until 2016.

The general secretary of ISHR is the French speaking Swiss Michel Baumann, who resides in Geneva at the seat of the Human Rights Council of The United Nations. The ISHR/IGFM (the German branch of ISHR) has consultative ECOSOC-status with the UN, associate status at the Department of Public Information of the UN, and consultative status at the European Council in Strasburg.