The World Evangelical Alliance (WEA) has concluded its International Leadership Forum (ILF) 2016 in Seoul, Korea. The annual gathering brought together some 90 leaders from 40 countries to strengthen partnership across organizational and geographical boundaries in key issues facing the Church today. ILF participants also shared meals with hundreds of Korean church leaders, visited and prayed at the Demilitarized Zone (DMZ) between North and South Korea, and issued a statement on the situation of the divided nation.

Bishop Efraim Tendero, Secretary General of the WEA, says: “This year’s ILF was very strategic for us at the WEA for various reasons. Besides the gathering’s importance in bringing together the various parts of WEA’s family to strengthen the personal and professional relationships among us, being in Korea allowed us to strengthen our relationships with the vibrant Christian community of this country. We are grateful that we received an overwhelming positive response from both, the participants from all over the world and the churches in Korea.”

90 ILF participants from 40 countries together with leaders from the Christian Council of Korea that served as generous host.

Partners in the Gospel: Building His Church

The theme of the ILF2016, ‘Partners in the Gospel: Building His Church’, focused on the Bible passage in Paul’s letter to the Philippians, where he writes: “In all my prayers for all of you, I always pray with joy because of your partnership in the gospel from the first day until now, being confident of this, that he who began a good work in you will carry it on to completion until the day of Christ Jesus.” (Chapter 4, verses 4-6, NIV)

The theme was applied to WEA’s threefold strategy of ‘connecting for common action, equipping for global impact, and representing with a global voice’ in order to more effectively advance the Good News of Jesus Christ and effect personal and community transformation for God’s glory.

Morning presentations introduced existing partnership models practiced by regional and national Evangelical Alliances, global WEA networks and others. Table discussions after each presentation helped participants apply these models in their own contexts and explore further opportunities for collaboration. 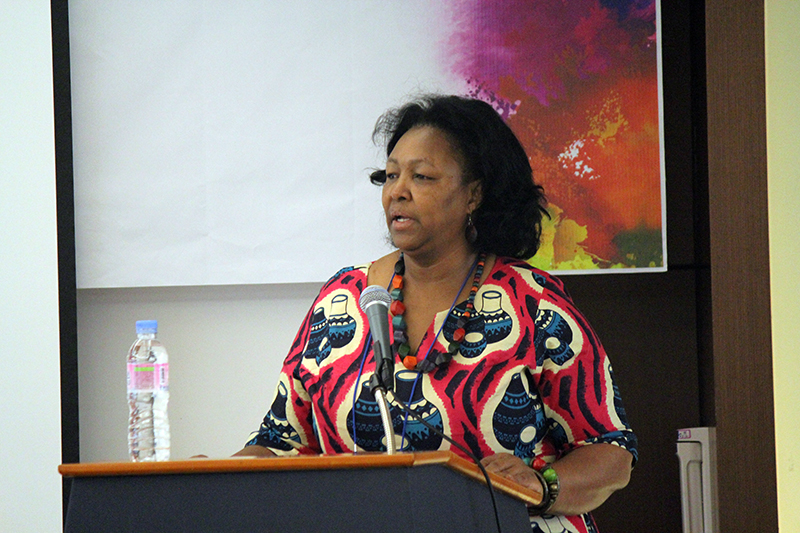 Connie Kivuti, General Secretary of the Evangelical Alliance in Kenya (EAK), speaks on the partnerships she developed to resource the work of the EAK.

In the afternoons, ILF participants gathered in issue-based groups:

Bible engagement - A 2014 survey by the WEA showed that Christian leaders in every region are deeply concerned about Bible illiteracy and a resulting lack of understanding of the relevance of God’s Word for everyday life. WEA has been in conversation with Bible Agencies, national Evangelical Alliances, church networks and others who have launched initiatives to address the issue. ILF participants discussed how to encourage further strategic collaborative efforts to help churches at grass roots to focus on Bible engagement.

Evangelism, discipleship, healthy churches and missional lifestyles – Three groups focused on different needs and challenges related to the fulfillment of the Great Commission, including: strategic approaches, sharing the Good News of Jesus Christ individually, discipling new believers to stand firm in faith and pursue a life of holiness, the need of healthy pastors for healthy churches for healthy societies, the pastoring of pastors and the use of healthy church models. They developed a range of action steps that aim to eventually strengthen local churches in their call to share the Gospel and be Good News people in every sphere of society.

Women and girls and the Church – Women and girls make up half of the population of the world, yet the Church is at times still more influenced by cultural rather than Biblical views on the the role of women. The focus group will now ‘create and promote a practical guide for the WEA and its constituency to engage, equip, encourage and mobilize men and women to be champions of women and girls in the Church, so that the WEA reflects a vision for how women can equally contribute to Church and society for the sake of the Gospel.’

A Christ-like response to persecution – Persecution of Christians is on the rise in many parts of the world, yet the response of Christians to persecution varies greatly. The group focused on assessing the varieties of evangelical responses to persecution and existing initiatives in standing with and equipping churches facing persecution. The group committed to helping national Evangelical Alliances with advocacy training, research and documenting of religious liberty violations, strengthening legal services, expanding partnerships with civil society, promoting prayer for the persecuted Church, sharing of persecution stories to raise awareness, and more.

Intra-faith and inter-faith relations – The WEA, as one of the three world church bodies, serving some 600 million evangelicals, is uniquely positioned to engage with others within the wider Christian community as well as other faith groups. For many years, the WEA has held dialogues, seeking to build bridges of understanding while recognizing the differences of faith and values of the various faith bodies. The group focused on developing language that is understood in the widely differing contexts around the world as well as addressing specific issues concerning the relationship of the Church with people of other or no faith.

On several occasions, the ILF provided space for interaction with local church leaders in Korea. It began with an Opening Ceremony, welcoming some 700 Korean church leaders and other guests. Many denominational leaders as well as representatives of the Korean government gave welcome greetings to participants.

On Thursday, a delegation of the WEA leadership was invited to attend the Korean National Prayer Breakfast with President Geun-hye Park where Bp Tendero offered a prayer on behalf of WEA. And on the final day, the Korean hosts again invited several hundred pastors for a farewell service and luncheon. 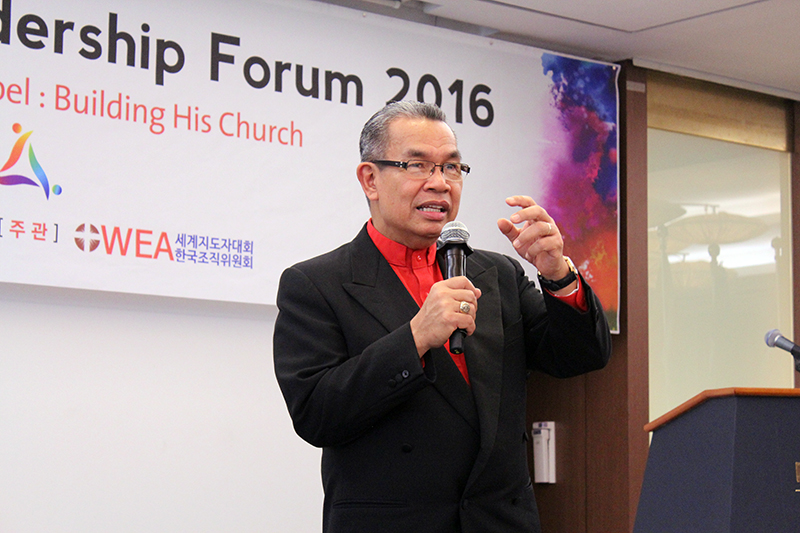 Bp Efraim Tendero, Secretary General of the WEA, introduces WEA’s vision and mission. During the ILF2016, he gave greetings to Korean church leaders during the Opening Ceremony and Farewell Service, and offered a prayer on behalf of the WEA at the Korean National Prayer Breakfast.

“After the cancellation of the General Assembly in 2014 that was to be hosted in Seoul, our coming to Korea allowed us to connect again with our member CCK and church leaders,” Bp Tendero said. “We have strengthened our relationship with the people of a nation that has been richly blessed by God and in response has sent out over 20,000 missionaries into the whole world. We were overwhelmed by their generosity and hospitality and are looking forward to continuing to work together in the Great Commission.”

ILF participants also had the opportunity to visit and pray at the DMZ where they witnessed first-hand the tension that has existed in the country for many decades. Rev. Ndaba Mazabane, Chairman of the International Council, led participants in a prayer for peace on the Korean peninsula and for reunification of the one nation.

He commented that “Korea is the only nation that is still divided and the pain felt by its people and the separated families on both sides are difficult to describe in words alone. It is our hope that God will make possible what seems impossible to man: to grant peace and an end to the division of the Korean peninsula.” 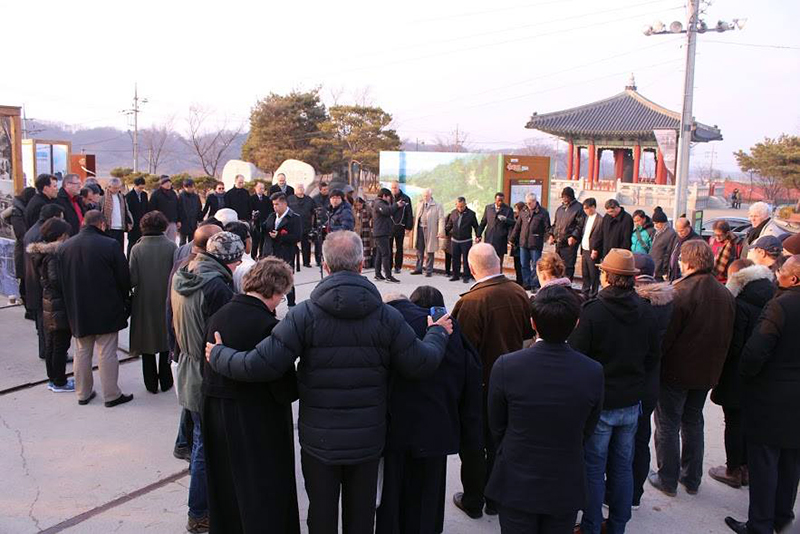 ILF participants at the DMZ pray for peace and the reunification of Korea.

On the last day of the ILF, participants released a statement called 'A Message of Goodwill from the WEA to All the People of Korea.' It reads in part:

In the spirit of reconciliation that Jesus entrusted to us, we pray for all the Korean people and the leaders of both governments that throughout this peninsula there will be peace and harmony.

All our nations bear the scars of history and strife of previous generations, which we all regret and none of us would have chosen. We want to be those who heal the wounds of the past and leave a lasting legacy of peace for our children and future generations.

We pray that the governments both in and outside the peninsula may be guided by God to undertake peacemaking initiatives in a spirit of mutual respect, not of condemnation. We commit ourselves to pray that the God of peace will be with all those who undertake these difficult tasks, which appear to be impossible in our own strength but with God’s help we can achieve lasting peace.


See also:
> WEA International Leadership Forum 2016 Begins with Opening Ceremony in Seoul, Korea
> ILF2016 Participants Send 'A Message of Goodwill from the WEA to All the People of Korea' [full statement]