WEA Now Five Years Active in the Human Rights Council of the U.N.

During four full weeks of March the U.N.’s Human Rights Council met at its base in Geneva, Switzerland, discussing a myriad of questions that haunt the ordinary people throughout the world. And it was not business as usual due to the many cracks of violence in the world of today. But perhaps most urgently due to the recent changes of policy in nations like the United States and Great Britain. Britain’s Prime Minister Theresa May in January explained it like this:  “the days of Britain and America intervening in sovereign countries in an attempt to remake the world in our own image are over.”

The March session always starts with high level government officials addressing the Human Rights Council and all were awaiting what the United States had to say, reflecting President Trump’s   ‘America First’ mantra and his criticism to multilateralism. The country sent only a Deputy Assistant Secretary of State for International Organization Affairs but the message was surprisingly clear and constructive: “When the Council functions properly, it has the ability to remind States of their commitments and obligations”. The US pointed to the UN’s bias regarding Israel but also highlighted its successes. Among them it specifically mentioned Sri Lanka. We note with thankfulness that the National Christian Evangelical Alliance of Sri Lanka (NCEASL) is at the forefront of courageously challenging government negligence of religious minorities. The WEA Liaison Office to the UN in Geneva supports them in this.

In the increasingly insecure world situation it is important that WEA is firmly present on the human rights front for the last five years. During every Council session WEA makes a specific statement on the treatment of minorities, defining this issue as the litmus test for peace and stability in a country. This time the upcoming elections in Indonesia were a reference point. The country responded to the WEA statement, using its right of reply to state that the threat to the Christian candidate for governor of the 9 million inhabitants country capital Jakarta is “indeed another dynamic to be responded”.

After much pressure in recent years the Human Rights Council during this session has finally decided to investigate the persecution of minorities in Myanmar by mandating an international fact finding mission. Freedom of religion organizations have actively lobbied for this for a number of years. The main victims in this country are Muslims, who suffer from violence just like Evangelicals. It is our duty to witness God’s freedom for the world and stay with the persecuted in this ordeal. The litmus test that persecution of minorities proves instability clearly applies here.

WEA works together with its global partner Micha Global on the situation in the Democratic Republic of Congo (DRC) and addressed the Council during the interactive dialogue about this country to be a voice for the victims of atrocities. With regard to Central African Republic, the advice of Evangelicals is actively sought by the U.N. The Independent Expert on this country not only addressed the Council but held an elaborate consultation with WEA and its colleague organization Caritas Internationalis to coordinate peace efforts that have so effectively been cultivated by the country’s religious leaders.

During the session, the Liaison Office received many guests but was particularly honored by the visit of WEA General Secretary Bishop Efraim Tendero and his wife Sierry. Bishop Tendero oriented himself to the opportunities that the Human Rights Council holds for witnessing the call of the gospel for all of God’s Creation. 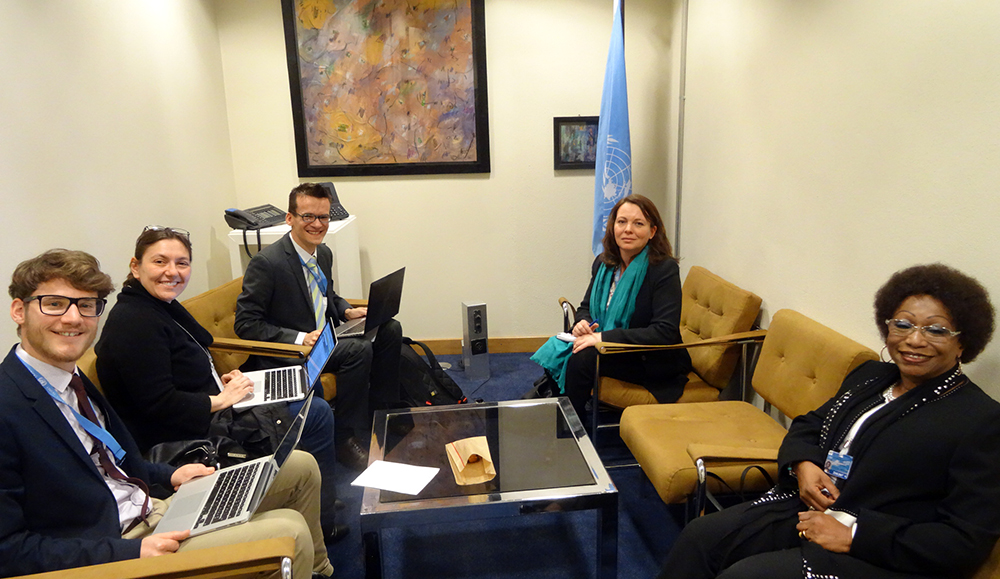 
Learn more about the WEA's engagement at the UN here.