(Geneva) In an extraordinary symposium on Oct 31st, the World Economic Forum highlighted the growing importance of faith and religion as one of the global trends that will have a major influence on social developments in the future. 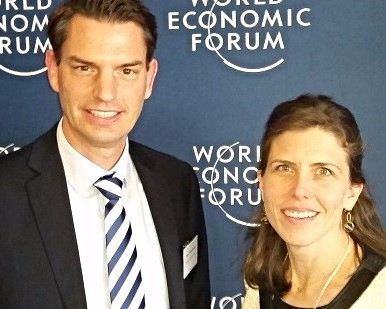 Plutschinski, Director of the WEA Business Coalition and member of the wider WEA Leadership, also referenced the growing "Business as Mission" respectively “Business for Transformation” movement in his address on the function of companies. Depending on the entrepreneur's intention and purpose, the entrepreneurial activity can also have a spiritual dimension, in addition to its financial, social and environmental function. This topic was linked to previously presented "10 Global Trends", one of which was the "Greater role of faith and religious culture".

Another theme of the symposium was the Fourth Industrial Revolution and its impact on people and society. In an exponential development of digital-decentralized processes and the fusion of physical, digital and biological spheres, the ethical assessment of the technically feasible is imperative. And the participation of faith-based organizations such as the World Evangelical Alliance is requested and desired, according to Mariah Levin from the Organizing Committee.

The World Evangelical Alliance is the largest international organization of evangelical churches and ministries and gives a world-wide identity, voice and platform to more than 600 million Christians in 129 countries.

A further discussion about the challenges of the Fourth Industrial Revolution from a Christian point of view will also be given at both the Congress of Christian Leaders (February 23-25, 2017 in Nuremberg/Germany) and the Christian Economic Forum (July 16-19, 2017 in San Francisco, USA).