A huge wave of solidarity is seen in countries bordering with Ukraine, as around  3 million people have left their home country due to the Russian invasion.

Churches in these countries are trusted partners and some are using their good connections with Christian communities in Ukraine to reach critical places with humanitarian aid.

Evangelical Focus asked a Christian leader in Hungary and a TV broadcaster in Romania about what they see happening on the ground. Earlier, we asked Christians in Moldova and Finland.

Istvan Horvath, from Hungary, works with OM and is the Secretary General of the Hungarian Evangelical Alliance.

Question. What is the mood in Hungary regarding the Russian invasion of Ukraine? Is there fear that your own country might be at risk of an invasion in the future?

Answer. I do not feel a real fear among the Hungarian population, people do not expect Russia to attack Hungary. There is a general belief that this is not the goal in Russia’s geopolitical strategy, and that attacking a NATO member state would trigger World War III, which would be very risky for Russia as well, because in all likelihood there would be no winner in such an event.

Q. What is a common prayer you have heard among Christians regarding the war in Ukraine?

A. Most of all, for the end of the war as soon as possible and for real peace. Then, for peace and reconciliation between the two groups. I also very often hear the prayer that this much suffering and bitterness will turn people’s hearts to God and that as many people as possible will turn to Him wholeheartedly. Many Christians pray for the suffering people, for the mourners, for the orphans, for the children, for all those affected by the war, and also for the soldiers.

A. There is tremendous help, unprecedented activity in this situation. Churches, congregations, missions work with great force, often working together and complementing each other. I see great activity in three areas:

– On the Hungarian side of the border with Ukraine, people are greeted at the crossings with food, drinks, blankets, warm-up facilities, interpreters, directions, transport (e.g. to a train station from where they can travel for free). Many people come to help with cars, vans and help people to travel to different locations. I also brought a family of eight from the border and they received housing and care in the OM Office. We helped them with everything, they spent a week with us, they travelled on to Spain today, where their relatives live.

– Help in Ukraine. Many come from the east and central regions of Ukraine to the border areas. Institutions, schools and kindergartens there will be responsible for the accommodation and care of these refugees. However, they cannot do this on their own, so help comes from Hungary to this Hungarian speaking part of Ukraine. I took out food, toiletries and bedding there two times. In a kindergarten, 65 refugees were accommodated, mainly women and children. When I went there for the second time in a few days, the number was already 75, and five more were waiting that day. In a secondary school, where I provided care for 110 people on my first visit, there were more than 160 people the next time. In the inner regions, the problem is even bigger because fewer aid transport are going there. I would like to go where the need is even greater the next time.

– Local congregations are very active in many parts of the country. Our congregation, for example, opened its church building, setting up three rooms to receive guests. We also got the old cultural centre across the street for accommodating refugees. There is a room with mattresses so that as many people as possible can sleep there. In addition, church members and friends have opened their houses so that we can now accommodate about 70 people. We cook for them or order food, take care of the medicines, organise their trips. We take them by minibus and car from the station, and we help them get train tickets or plane tickets. We welcome them, comfort them, encourage them and deal with the children. We ordered a shower container to the yard of the church because in the church we have just one bathroom.

Romania: “Christians take refugees into their homes, churches and guesthouses”

Tudor Petan is the founder of AlfaOmega TV, a Christian media initiative in Romania.

Q. What is the mood in Romania regarding the Russian invasion of Ukraine? Is there fear that your own country might be at risk of an invasion in the future?

A. Part of the people don’t fear this war because they don’t believe Putin is going to start a war with NATO.Others fear the invasion is not going to stop in Ukraine. Several battle groups have come from France, Belgium and other places to our country while the NATO is strengthening the capacity of protection at its borders. When people see those news, of course they fear that this is not only a safety measure taken in advance, but that the authorities have information that there is going to be a 3rd World War in the end.

Besides that, in Romania, the effects of this war started with the prices of food and gas, which are now higher. A couple of days ago, there was a “rumour” started by some gas stations that the price would go crazy high within the next days and people started queuing at the gas stations to fill up their tanks. This ended up in chaos in many cities, the traffic was stuck in many places with long queues. People only calmed down when the authorities came forward and announced that gas prices are not going to get higher and there was no need to panic. The majority of our country are against this war and help the refugees, but there are still voices of the Russian propaganda online that can influence many.

Q. What is a common prayer you have heard among Christians regarding the war in Ukraine?

A. All the churches and all the Christians started praying for Ukraine even before the war, but more powerfully after the beginning of the war. There are many prayer movements in our churches for this war to end with a diplomatic ending. We are also praying for the refugees, for peace in their hearts in these troubled times for their country and families. Romanians realised that they have peace in their country and learned to be thankful for everything they still have.

A. Almost all our churches are involved in welcoming refugees. Since day one, Christian organizations, churches were present at the borders welcoming women and children with food, sweets and toys that can be a simple joy and help for the moment. But Christian people also took refugees into their homes, hotels, guesthouses for free, feed them and take care of them for as long as it is needed. Churches opened their spaces and reorganised their rooms with beds and tables for refugees to sleep and eat at the church building and stay for as long as they need. Some of them are staying in Romania, mostly mothers with children, others are going to other countries, so churches are also paying for their transport to other countries from Europe such as Austria or Germany.

Furthermore, most of our churches are in direct contact with churches from Ukraine and send big trucks loaded with food, medicines, clothes, diapers or anything they need. These kind of transports are made every day with a lot of attention, because it is important to have a direct contact in Ukraine, otherwise the materials won’t get into the right hands.

It is very important that each refugee is recorded at the Romanian Police. However, Romanian churches are very organised, no matter the denomination, they work together to be more efficient. There is a huge involvement of the Romanian churches and it is a time when the Christians can show the love of Christ in a practical way by helping and being close to the ones in need, the Ukrainians. It is a time when I am proud to say I am a Romanian when I see the big hearts of our people and the huge hospitality they show, no matter the denomination. 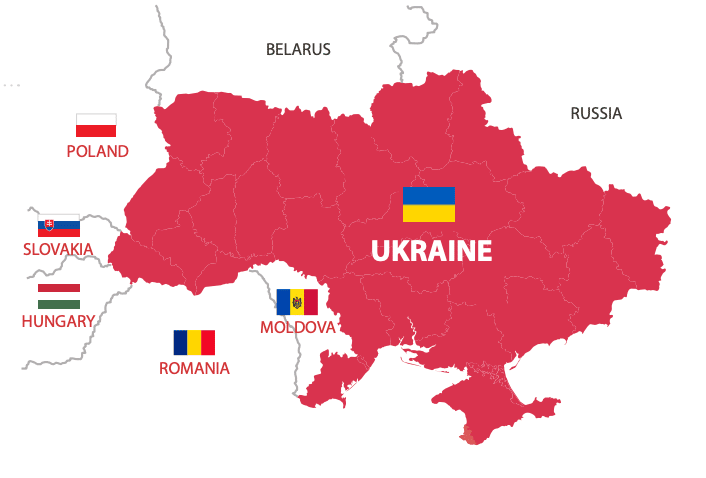