CAMPAIGNERS against corruption and world poverty have presented 10,000 call-to-action postcards to EU decision-makers in Brussels this morning (Wednesday 21st).

Micah Challenge, Mission-Net, Tearfund and EXPOSED campaigners hope to ‘Shine a Light on Corruption’ and help the lives of the world’s poor by bringing their messages to EU decision-makers in Brussels.

The delegation delivered 10,000 messages on postcards from 22 member states to the Danish Government – which currently holds the Presidency of the European Union.

They are demanding that the EU pass strong laws requiring oil, gas and mining companies listed on European Stock Exchanges to have to publish what they pay to governments for access to these resources.

Joel Edwards, the International Director of Micah Challenge, said: “This is a scandal of our times and EU leaders have a responsibility to ensure corruption does not blight the lives of the poor across the world.

“Some 3.5 billion people live in countries which are rich in oil, gas and mineral resources. Tragically, money from these areas often doesn’t benefit the poor communities who live nearby. EU leaders have to act now and ensure money ends up in right places.”

The campaign to get 10,000 messages began with over 1,500 young Christians from across Europe taking action at the Mission-Net Conference in December 2011

Evi Rodemann, Director of Mission-Net, said: “Christians across the world are uniting in action to shine a light on corruption. This is what these 10,000 messages symbolise.

“The evidence is strong. If all payments were made public, revenue would be sufficient to meet the Millennium Development Goals and provide everyone living with HIV with vital drugs for over 30 years.”

Since January, local churches in Denmark, Germany, UK, France, Portugal, Austria, Ireland, Finland and the Netherlands have supported the campaign.

The EU legislation is currently being discussed by appropriate committees in the European Parliament. Campaigners across Europe have also been holding meetings with key MEPs to ensure they understand the importance of passing strong and effective legislation that will provide local communities with the information they need. A decision is expected in the next few months.

If passed the legislation would increase transparency and accountability, and allow civil society organisations and local churches in the developing world to hold their governments to account, and ensure the revenue is being spent on helping to achieve the MDGs.

Bishop Dr Stephen Munga, from Tanzania, who also attended the delegation today, said: “Local communities should be able to hold their governments to account on these issues, which will improve their lives. That’s what this campaign is all about.”

Micah Challenge is a global movement active in over 40 countries whose aim is to encourage Christians to be committed to the poor, and hold governments accountable to the Millennium Development Goals, signed by 189 countries in the year 2000 which committed to halving world poverty by the year 2015. www.micahchallenge.org

Tearfund is a Christian relief and development agency building a global network of local churches to help eradicate poverty. Tearfund is a member of the Disasters Emergency Committee. www.tearfund.org/unearth

EXPOSED is a global campaign of Christians around the world who will raise their voices together in a united response against corruption, culminating in a week’s campaign in October 2013. www.micahchallenge.org/campaigns/exposed 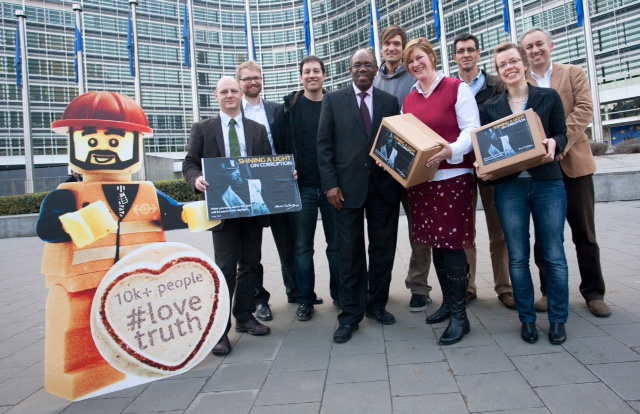 10000 POSTCARDS: Joel Edwards (centre front) with members of the international delegation presenting 10000 messages on postcards to EU bosses in Brussels this morning.