A powerful and pertinent new book released this week aims to help Christians explore God’s strategy to use the gifting of men and women for more creative and effective mission. The book, called Co-Workers and Co-Leaders: Women and Men Partnering for God’s Work,  looks at gifting and leadership  from a biblical viewpoint and also incorporates lively personal stories from across the world. 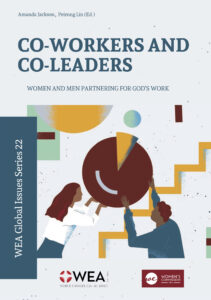 Published as the latest volume in the World Evangelical Alliance’s (WEA) Global Issues Series, the book features theologians and missions experts who challenge readers to think beyond the usual debate about the role of women in the Church. With topics ranging from women in the Bible, Jesus’ encounters with women, to women and men in ministry in first-century churches and contemporary stories of women and men partnering for God’s Kingdom, the book draws on insights from evangelical Bible teachers and thinkers in mission from 13 different nations and cultures.

Bp Dr Thomas Schirrmacher, who recently assumed the role of WEA Secretary General after serving in WEA’s Theological Commission for many years, has written in the foreword, “I hope that this book helps to inspire all Christians to work together for equal opportunity, equality in ministry, according to gifting and for recognition of the very real contribution women make as we pray ‘your kingdom come’.”

The book’s editors, Amanda Jackson and Dr Peirong Lin, have written that they want readers to explore what positive partnerships can look like in the Christian world today and how we can overcome distrust. “We want the Church to be more effective, more healthy, for families and church leaders”, said Peirong Lin, who is the first woman appointed as Deputy Secretary General of the WEA.

The book is aimed at leaders of Christian networks and churches, local church leaders and young people. It includes eight stories from across the world that deal honestly with the opportunities and issues facing woman and men. Every chapter has reflection questions to ground the ideas in personal experience.

Amanda Jackson, who leads the Women’s Commission, explained the project, “We wanted to explore how women and men can serve and lead together in healthy ways which are ‘biblical’ and avoid the acrimony over women preaching and leading that we all know about, and which seems to have increased in recent years rather than subsiding.”

The book has a number of actions individuals and churches can take, at a pace that suits their context. It is a follow on to the Call to All Christians, written by 60 women leaders in 2019 and endorsed by the WEA and the Lausanne Movement. The book will be accompanied by webinars in June.

The book is available FREE to download as PDF.

It can be bought through Amazon.eu. It will be available on Amazon in the United States and Canada in the near future.

Watch a 2 minute introduction to the book.

Read the Call To All Christians, available in 10 languages.