Bonn, Germany / Deerfield, IL – February 27, 2021
At a live-streamed leadership handover event today, the World Evangelical Alliance (WEA) inducted its new Secretary General & CEO Bishop Dr Thomas Schirrmacher opening the next chapter in its 175-year history. In his inaugural speech, Schirrmacher responded to the frequently asked question “what is an evangelical?” by highlighting what evangelicals believe to be the DNA of Christianity: the diversity of the family of believers around the world, the historicity of our faith, the authority of Scripture, the mission of spreading the Gospel message, speaking up for religious freedom and the unity of believers who hold onto these core convictions.
Speaking from a studio near Bonn, Germany, Schirrmacher was joined by outgoing WEA Secretary General Bishop Efraim Tendero who handed him a globe and a Bible symbolizing the heart of God for the world and the Word of God as a guide for his leadership of the WEA. It was followed by greetings, prayers and blessings from evangelical leaders who joined the 90-minute digital event from every region of the world, representing the 9 regional and 140 national Evangelical Alliances that make up the WEA. 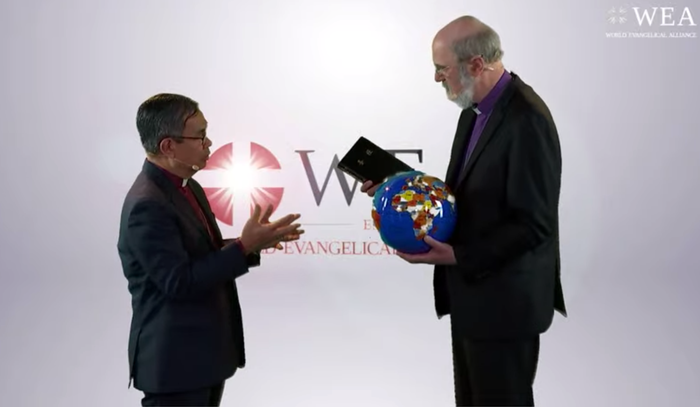 Outgoing Secretary General Bp Efraim Tendero (left) handed over a globe and a Bible to Bp Dr Thomas Schirrmacher who assumes leadership of the WEA.

Schirrmacher thanked the many contributors for the well-wishes and delivered a brief inaugural speech, in which he touched on some of the cornerstones of what it means to be an evangelical, raising the question whether this is not in actuality equal to what it means to be a Christian.
Celebrating the increasing diversity of evangelicalism from “churches in the Brazilian rainforest where they worship ten meters above the ground in high trees” to “churches in skyscrapers in Malaysia where you have a church on the 20th floor of a high building,” he shared that even at the time when the WEA was formed in 1846, people questioned whether believers as diverse as Anglicans, Methodist, Lutherans and the Salvation Army could in fact work together. But even today, when the more than 600 million evangelicals globally are more diverse than ever, there are common essential beliefs that hold the movement together.
Schirrmacher emphasized the conviction of the historical authenticity of the Bible, saying “we believe in the resurrection of Jesus and we believe in Pentecost when the Holy Spirit filled the believers, the members of the church.” And while some people question whether these were real events in history, “we [as evangelicals] stand for the historicity of our faith.”
He went on to describe the Bible as the “confession of the Church” that stands above everything and everyone, and pointed out that the very idea of a paper document – rather than a person – having the ultimate authority originated in the Old Testament where the Torah was regarded as higher than even the king. Schirrmacher explained  that this principle of a so called ‘Paper Pope’ “assures that none of us, including me, are above the Word of God. We all submit to the Word of God, no one is above it.” This foundational principle and conviction then also allows a diversity of traditions – from Calvinist Reformed to Pentecostal and Charismatic – to unite in one movement. 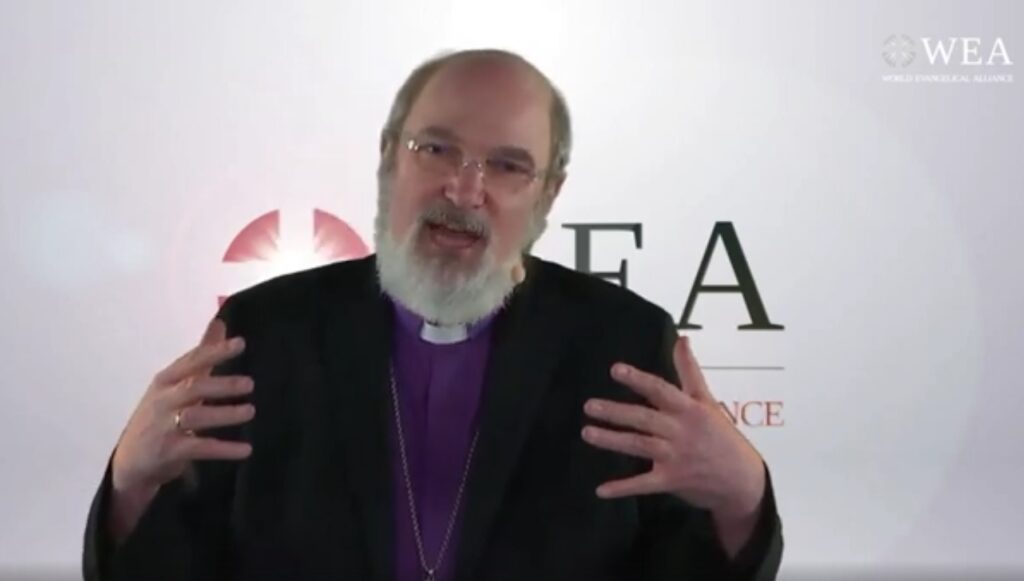 Bp Dr Thomas Schirrmacher speaks about the DNA of Christianity during his inaugural speech as the new Secretary General of the World Evangelical Alliance.

Another essential characteristic of evangelicalism is the emphasis on mission and proclaiming the Gospel message. However, quoting the opening line of the 2011 joint document on Christian Witness in a Multi-Religious World produced by the WEA, the Roman Catholic Church and the World Council of Churches, Schirrmacher said that “all churches agree now that mission is the very being of the church,” even if some Christian traditions may not be putting it into practice as much as evangelicals often do.
With his own involvement in the issue for decades, Schirrmacher then highlighted religious freedom and concern for persecuted believers as something that has been integral to WEA from the very beginning. “In 1846, the World Evangelical Alliance was the first ever large religious body speaking up for religious freedom. And that meant speaking up against state churches and against Christian nationalism,” Schirrmacher noted, acknowledging that this is still a hot issue evangelicals wrestle with today.
The very idea of religious freedom and the need for a decision to believe based on free will, however, is not simply a political principle, but it is integral to the understanding of God’s love and His desire to be in a relationship with the humans He created. “God Himself wants to be loved, wants us to trust Him, wants our life. He does not want us to pray to Him because we are forced or because someone paid us or somebody cheated us. He wants our very trust, our very heart and our very love, and love is something that cannot be forced,” Schirrmacher said.
Finally, the WEA is a movement that strives for unity within evangelicalism, but “if we want to bring the Anglicans, the Pentecostals, the Reformed, the Salvation Army, all those groups in our midst together, we can only do it around the DNA of Christianity,” he commented. And he invited others who align with these principles, saying “we are open to any other church outside of our movement to join us in those points of the DNA, and so we hope wherever possible to extend our vision to many other churches in this world.”
Schirrmacher concluded by acknowledging that the task of leading the WEA goes beyond the ability of any one person and said that it is only by the prayer of millions around the world that he will be able to take on this role and lead the WEA into the future.
Related:
> Read the full transcript of the inaugural speech
> Watch the Inaugural Speech (9:58 min)
> Watch Thomas Schirrmacher’s personal introduction video (6:25 min)
> Visit the Leadership Handover page with program information and list of speakers & contributors
Read also:
> WEA Leadership Handover Ceremony to Induct Next Secretary General, Outgoing Leader Appointed as Global Ambassador – Feb 25, 2021
> Newly Appointed Deputy Secretaries General and Development Director to Bring Strength to WEA amid Transition to New Leadership Next Month – Feb 11, 2021
> WEA International Council Appoints Dr Thomas Schirrmacher as Next Secretary General / CEO, Starting in March 2021 – Oct 29, 2020]]>