Advocating at the UN for Religious Freedom in Algeria, Iran, Nepal, India and Italy

The Geneva Liaison Office of the World Evangelical Alliance exists to strengthen the voice of the more than 600 million evangelicals worldwide in order to achieve positive structural changes in their countries, improving rule of law, freedom of conscience and of religion, minority rights, social justice and good governance.
As the people of God pursue the Great Commission, we ask for your prayers so that the Geneva Liaison Office can accompany national evangelical alliances facing pressure, discrimination and persecution, as well as those operating under weak rule of law, in securing more favorable conditions for their respective ministries.
Please pray for our office’s team Michael Mutzner, Wissam al-Saliby and Albert Hengelaar, to know how to navigate U.N. institutions and circles, and the diplomatic missions of nations that are part of the U.N., and to seize the opportunities that will benefit evangelical churches all over the world.
In this newsletter, we provide an update on recent activities of the office.
Universal Periodic Review: Focus on Italy and Iran
In November 2019, Italy and Iran were among 14 countries undergoing their Universal Periodic Review (UPR). The UPR is a peer-review process where countries make recommendations to those undergoing review, aimed at furthering the human rights situation in those countries. 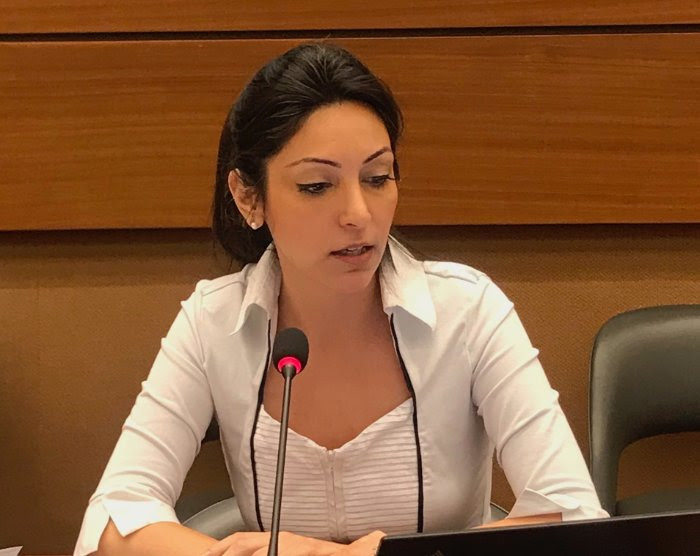 In preparation for Iran’s UPR session, on 10 October 2019, Dabrina Bet Tamraz (photo) spoke on behalf of the WEA and of Christian Solidarity Worldwide on a panel of civil society organizations, presenting the situation of Freedom of Religion in Iran to a large audience of diplomats of countries would be challenging Iran on its human rights record the following month. After sharing her personal story, Ms. Bet Tamraz described the situation of Christians in Iran, including converts to Christianity, as well as the situation of Baha’is. Read the statement.
In addition, during her visit to Geneva, we organized for Ms. Bet Tamraz bilateral meetings with human rights diplomats from a dozen countries during which she was able to inform them of the situation of religious freedom in Iran.
We are grateful for the many countries who echoed WEA’s appeal and made recommendations to Iran during its UPR session in November to protect and respect the right to freedom of religion or belief. We cite, inter alia, the Netherlands’ recommendation to Iran to “amend Article 13 of the Iranian Constitution to ensure that all religious minorities, including Muslims, Christians, Christian converts, Jews, non-believers, Zoroastrians and the Baha’i in the country are recognized and able to fully enjoy the right to freedom of religion and belief,” and Norway’s recommendation to “ensure the freedom of religion and belief for minorities such as the Bahai’s and Christian converts, by adopting concrete measures to eliminate discrimination and enhance protection.”
In October, we also organized the visit to Geneva of the president of the Italian Evangelical Alliance, Giacomo Ciccone, together with the pastor of the Punto Luce Church, Michael Schaafsma, and a lawyer. They attended a meeting with civil society organizations organized by the Italian diplomatic mission with the President of the Interministerial Committee for Human Rights of the Italian Ministry of Foreign Affairs. Pastors Schaafsma and Ciccone and the lawyer explained how the administrative measures ordering the closure of the premises of the Punto Luce Church by the Municipality of San Giuliano Milanese are a violation of the right to freedom of religion or belief. For more information on this case, see the following article on Evangelical Focus website: Italian evangelicals denounce lack of religious freedom.
Keeping the Human Rights Council abreast of Restrictions on Religious Freedom
The Human Rights Council’s 42nd session during three weeks in September was an opportunity to highlight recent challenges to the right to freedom of religion or belief and to shed light on increasing restrictions on Christians and other religious minorities in several countries.
Algeria | At the request of our member alliance l’Église Protestant d’Algérie (Protestant Church of Algeria – EPA) and joined by the Commission of the Churches on International Affairs of the World Council of Churches and Christian Solidarity Worldwide, we called on Algerian authorities to grant permission to all forcibly closed churches to re-open and grant permission to EPA-affiliated churches to continue to use rented premises as places of worship.
Written statement | Oral statement | Read WEA Global Ambassador Brian Stiller’s Dispatch on Algeria.
Nepal | We called on the government of Nepal to repeal its 2018 amendments to the criminal code, which criminalizes a large scope of legitimate religious activity, and to cease the unlawful arrests of Nepalese Christians.
Oral statement
Bhutan | We called on the Royal Government of Bhutan to allow the registration of churches, and to guarantee Freedom of Religion or Belief.
Oral statement
Central African Republic | We expressed concern over the security situation in the Central African Republic, and reiterated our appeal for accountability for war crimes.
Oral statement in French
A call for peaceful and inclusive societies | WEA Global Ambassador Brian Stiller called at the Human Rights Council’s September session on political leaders everywhere to firmly speak up against hate speech, exclusion and scapegoating, and instead, to advocate for peaceful and inclusive societies.
Oral statement | Video of the statement
Past and Upcoming Events
In December a coalition of religious organizations including the World Evangelical Alliance came together in an event titled Faith-Based Action for Scaling Up a Culture of Encounter with People Seeking Refuge. Initiated by Caritas Internationalis, and held on the margins of the Global Refugee Forum in Geneva, the gathering was an opportunity to reflect on the role of faith based organizations in promoting a culture of encounter and in building more resilient and inclusive societies, in a spirit of solidarity.
Also in December, the Geneva Liaison Office of the WEA participated in an Expert Workshop on a Human Rights Training Toolkit for Faith Actors. Faith-based organizations and other civil society organizations, as well as UN experts and staff, held this two-day workshop around the Faith for Rights framework of declarations and rules, which seeks to provide practical measures for faith actors to address incitement to religious hatred, discrimination and violence as well as other forms of intolerance. In 2017, WEA Associate Secretary General for Theological Concerns Dr.Thomas Schirrmacher was instrumental in the drafting of the “Beirut Declaration on ‘Faith for Rights’”
Learn more about Faith for Rights. Read the Beirut Declaration and its 18 Commitments.

Open Invitation to Event on Situation in Burkina Faso and Nigeria

On January 24, the WEA and the Working Group for Religious Freedom of the Swiss Evangelical Alliance will hold a side-event at the World Economic Forum in Davos that will host evangelical leaders from Burkina Faso and Nigeria, to address the security deterioration in West Africa, and its implications for socio-religious pluralism and economic development.
Where: Freie Evangelische Gemeinde Davos (English Church of Davos), Scalettastrasse 1, 7270 Davos Platz.
When: January 24, 8:00am-9:30am
You are invited to attend, RSVP not required.
Event Highlighting Recent Closure of Churches by Algerian Government
And on March 4, the WEA, the Commission of the Churches on International Affairs of the World Council of Churches, and the Protestant Church of Algeria (WEA’s national member body), will hold a side-event during the UN Human Rights Council’s session to address the recent closure of churches by Algerian authorities.
Where: Palais des Nations in Geneva
When: March 4 (Event time to be determined)
For more information, please contact us at [email protected].
WEA Geneva Liaison Office in the Media
Vietnam refuses 50 key recommendations for improving human right, Radio Free Asia wrote following the UPR report adoption of Viet Nam (In Vietnamese; 5 July 2019).
Evangelical Focus news site reported on our work during the 42nd session of the Human Rights Council (1 October 2019).
The Swiss German magazine Idea Spektrum (2 October 2019; subscribers only) and in the French magazine Christianisme Aujourd’hui (21 October 2019) interviewed WEA Advocacy Officer Wissam al-Saliby about his work, in the joint article: “Lobbyist for Human Rights at the United Nations.”
Should Christian organizations be neutral towards governments, including when faced with oppressive rulers? Wissam al-Saliby sought to reflect on our witness and engagement, as Evangelicals, with rulers who may flaunt with justice. (3 October 2019)
Algeria: “They can close our temples, but they can never close the hearts that are receiving Christ,” Evangelical Focus (11 October 2019).
German newspaper Die Welt wrote on the dramatic increase in persecution of Christians in Algeria (in German, 15 December 2019).
Help us strengthen and sustain the work of WEA’s efforts at the UN!
Please lift up our office’s efforts in your prayer, so that our reporting and advocacy will bear fruit for His Kingdom, and in the lives of Christians suffering discrimination and persecution.
In addition, you can sustain our work through your generous giving. There are several ways you can give:
Give online with a credit card:
Please visit www.worldea.org/donate where you may select to donate towards the WEA United Nations Engagement.
Give by check:
Please mail checks to the following address and designate your gift for “Geneva Advocacy”:
World Evangelical Alliance
P.O. Box 7099
Deerfield, IL 60015
United States
For wire transfers:
Please contact us at [email protected] and we will be happy to assist you.
Donations from the United States are tax-deductible.
Visit our Office!
We strive to be your voice at the global platform of the world’s nations in Geneva. We witness every day that freedom is not self-evident to power brokers and we plead with them that believers be granted the freedom that is necessary in societies for human flourishing, sustainable peace and rule of just law.
If you are interested in visiting us in Geneva and learning about our ministry, in view of supporting our office, kindly contact Albert Hengelaar at [email protected].]]>