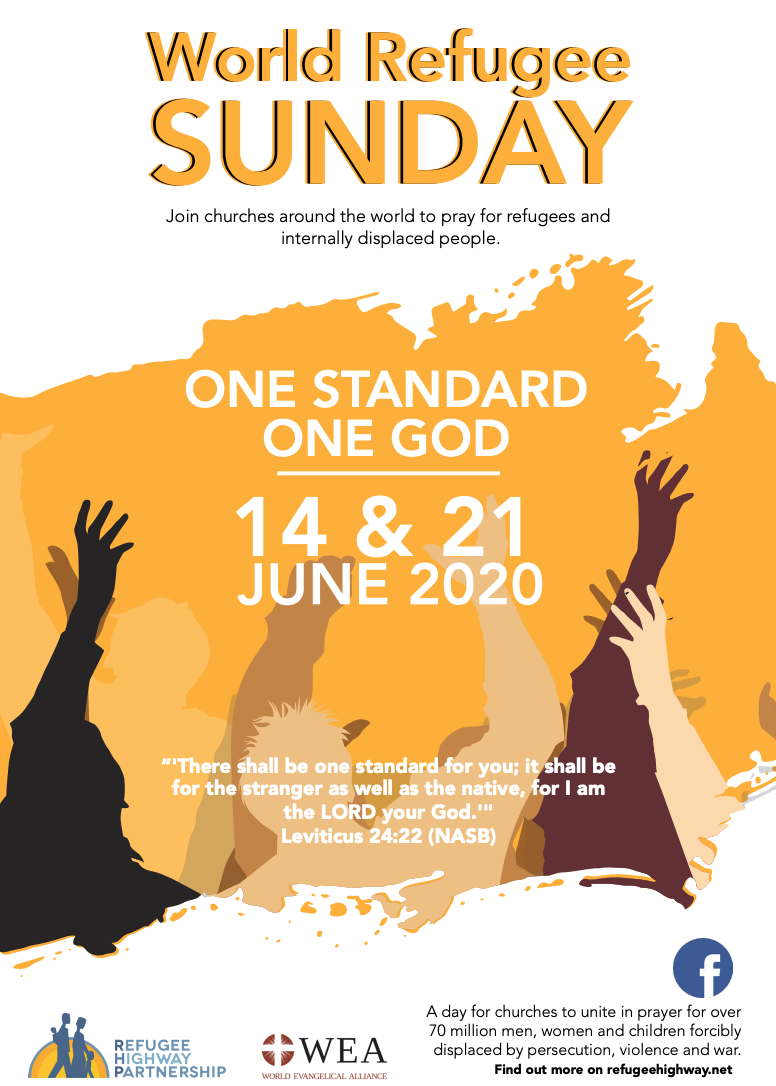 The World Evangelical Alliance together with the Refugee Highway Partnership (RHP) call on churches worldwide to observe World Refugee Sunday on June 14 or 21, the Sundays before and after World Refugee Day.

Pain, suffering and death have become the ‘new normal’. Globally some are experiencing even greater and unmitigated levels of pain and suffering. Among those are refugees. World Refugee Sunday is an opportunity for Churches, Sunday Schools and Youth Groups to raise awareness of the suffering and pain of the more than 71 million who were forcibly displaced by conflict, persecution and hardship.

The theme of this year’s World Refugee Sunday is ‘One Standard, One God’, inspired by Leviticus 24:22 that reads “There shall be one standard for you; it shall be for the stranger as well as the native, for I am the Lord your God.”

“The theme emphasizes that the God of the Bible deals consistently with all people everywhere. Sadly, people and nations are not as consistent. The marginalised – including refugees – are often treated very unjustly,” said Jude Simion who heads up WEA’s Refugee Task Force and is part of the RHP. He added: “This year, we want to reminder ourselves that refugees are people. They are made in the image of God just like us and should be treated with the same dignity and respect we want to be treated ourselves.”

The RHP has produced resources to download and use virtually on World Refugee Sunday next month.

Many refugees could not download those resources themselves (not having electricity or connectivity), but others can – turning the new awareness received from the resources to fervent prayer for:

Sometimes the numbers and realities may feel overwhelming, but what every believer can do is to pray and to raise awareness in conversations with others.

The following is a brief personal account by a pastor who experienced displacement:

In 1994, I was forced to leave my home country, the Democratic Republic of Congo. On this long and arduous journey, I have been asked repeatedly why I am one of the many millions of people who have been forcibly displaced. The more I try to explain and continue to do so even to this day, the more hurt and humiliated I feel. Little weight is given to the root cause of my displacement. I have sometimes been terrorised, imposed, or forced to minimise or bend the reasons for my eviction. My case and many more cases are simplified or deprived of its meaning and is simply called “refugee crisis”.

As for the readers of my story, please may I graciously ask you to remember that I am not another number not to be mentioned when COVID-19 covers the front pages of all media without dedicating one paragraph to refugees and the forcibly displaced. I am a human being like rich and poor currently locked in by fear of being contaminated or grieved by the loss of their loved ones. I equally deserve protection and dignity like any other person, no matter the circumstances.