In just over a month Christians around the world will unite in prayer for fellow believers who are persecuted for, simply, following Jesus. This international day of prayer, which is commonly known as IDOP, is being supported by the World Evangelical Alliance (WEA), a global ministry that helps Christians work together locally and globally to spread the gospel in word and action.

In his second ever trip to the UK, Bishop Efraim Tendero, secretary general and chief executive officer of the WEA, visited the Evangelical Alliance’s resource centre in London for the very first time. There, I had the opportunity to speak with him about the international church, what the WEA is doing to strengthen it, and issues that are closer to home, including the global influence of the UK church and Brexit.

“In many countries around the world, Christians are being persecuted because of their faith,” says Bishop Ef, as he is known. ​“The statistics are staggering, and we only have to look at Open Doors’ World Watch List 2018 to get a good idea of the high number of believers who are murdered, raped or forced into marriage, and the churches that are set ablaze, all in places where Christians are the minority or following Jesus is illegal, forbidden or punishable.”

But it’s in these very places where the people of God are penalised, that the church is growing at astonishing rates, against the odds of the circumstances that Christians face. If you take a look at stats from the Centre for the Study for Global Christianity, there are around 600 million evangelicals around the world today; this is a more than 500 per cent increase since 1960, when there were 90 million evangelicals globally.

Bishop Ef explains that ​“the most growth is seen in the global south, in regions such as Latin America, Sub-Sahara Africa and Asia – places that have the greatest number of population and need.” For example, in the early 1900s, there were 50,000 Christians in Latin America; there are now more than 100 million. Also in the 1900s, there were 5.4 million Christians in Sub-Sahara Africa; there are now 500 million. And in 1960, Nepal had only 30 known Christians, but now there are 1.4 million believers in the country. ​“This growth,” Bishop Ef adds, ​“is despite persecution and struggle.”

Nodding to a book written by WEA global ambassador Brian Stiller, Bishop Ef says there are five main factors that are driving growth in these regions. First, as he puts it, ​“we’re in the ​‘era of the Holy Spirit’”. Bishop Ef explains that in the past, the Holy Spirit wasn’t emphasised. ​“Now, though, with the growth of the Pentecostal and Charismatic movement, the gospel is being shared with the power of the Spirit, and people are catching onto it.”

In many countries around the world, Christians are being persecuted because of their faith.

Second, the Bible is now available in many languages, meaning people in these regions can access the word of God in their mother tongue. ​“This has engendered a real response to, and assimilation of, biblical truths, which has led to transformation,” says Bishop Ef, who lists indigenous leadership, churches getting involved in community and public life, and the presentation of the whole gospel (words and actions) as the other key contributory factors.

But, there’s still a long way to go, and this journey is despite the macrosocial challenges that hinder these nations, Bishop Ef admits. ​“The priesthood of all believers is a strong biblical doctrine, but there’s a risk it might undermine the value to work together and churches will remain independent and introspective,” he explains. ​“So, the challenge is bringing the churches together and avoiding duplication and competition, and this is where establishing national alliances comes in.”

The WEA’s objective is to help evangelical churches throughout these regions to catch the vision to collaborate with others, an approach to teamworking that has been working for many years in the global north, Europe being a prime example. ​“We are stronger together,” emphasises Bishop Ef. ​“Think about it: in a country where many of the evangelicals are minorities, they become a stronger force when they come together. And when united, Christians will be more effective in preaching the gospel and bringing about community transformation.”

Bishop Ef says the more established alliances around the world, many of which he’s delayed visiting due to their stability and the greater needs elsewhere, are superb models for up-and-coming networks in the global south; and they’re also lending a hand, which reinforces the magnitude and potential of the global church. He shares a couple of examples: the Evangelical Alliance UK helps to strengthen the European Evangelical Alliance, and the Swiss Evangelical Alliance is in Cuba, helping out there.

Even so, Bishop Ef encourages Christian bodies in the UK and further afield to keep on fighting for the persecuted church. ​“Just being aware of the situation and the need of those who are suffering, and praying for them, is a good start,” he says. ​“But we encourage those who are able to, to advocate for the persecuted church. A lot is already being done by our counterparts in Europe, but can this be pushed even further?” Bishop Ef considers, for example, the percentage of the UK’s gross domestic product (GDP) that is given to some countries in the form of aid. ​“Can the UK challenge the governments of the countries it is supporting to uphold citizens’ religious liberty?” he asks.

As right as Bishop Ef is about the UK and its church being, by and large, pretty stable, the past few years have seen change that has unsettled people across the board and the political climate. So, I ask: what about Brexit? Bishop Ef comments, ​“The UK has contributed much to the church and Christian mission globally. Our fear is that Brexit will symbolise the UK turning in and the possibility that citizens are focusing more on countrywide matters than the global community. So, the possibility and danger of being paternalistic could be there, because the UK now has to assert and protect the needs of the country.

“However, our hope and expectation is that the UK church will continue to nurture the global and spiritual vision of ministry. The UK church is a great model, working together for something, and that something is making Jesus known. It’s my first visit and I’m so encouraged to see what God is doing and how the church in the UK, supported by the Evangelical Alliance and other Christian charities and organisations, will continue to fulfil the mission and mandate that Jesus has given us.” 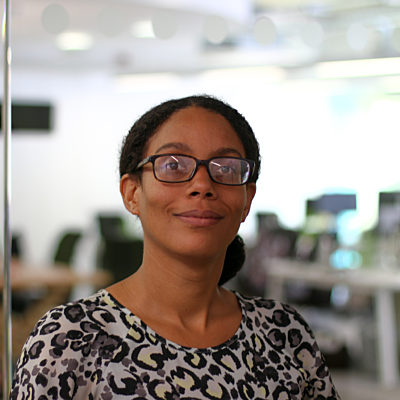 After asking God to bless her with the right role at a God-centred organisation, Naomi joined the Evangelical Alliance in 2018 as editorial content manager. Positions with publishers and within the marketing and communications faculty of a higher education institution, plus stints as a reporter, have enabled the media and cultural studies graduate, who has an NCTJ diploma in newspaper journalism, to hone the necessary skills and qualities to serve members well.

Subscribe
PrevPreviousWorld Evangelical Alliance Head: Evangelicalism Needs to Be ‘Reclaimed’ in Trump Era
NextSchirrmacher thanks 40.000 Ahmadiyya Muslims for the Engagement for Religious FreedomNext