At the end of his speech on principles of peace-making at a Vatican conference on “Ethics in Action,” Prof. Thomas K. Johnson, WEA Ambassador to the Vatican, asked the photographers to come to the front. He then publicly shook hands with the Iranian Shiite Ayatollah Mostafa Mohaghegh Damad, a prominent international spokesman for his variety of Islam. When asked about the meaning of his gesture Johnson said this was a public offer from the World Evangelical Alliance to send senior representatives to work on peace with any government or any major religious body that finds itself in conflict with evangelical Christians. 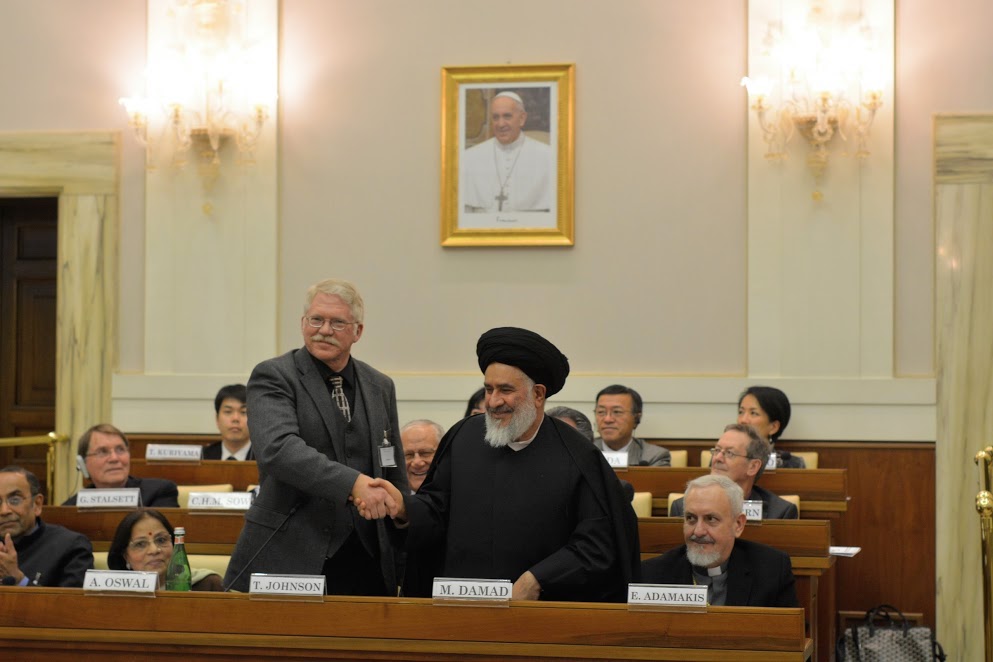 In response to a question about this, Prof. Dr. Thomas Schirrmacher, Associate Secretary General of the WEA and Johnson’s superior, said, “Dr. Johnson is responsible for these efforts in relation to all Roman Catholic institutions while I and others have taken it up to visit all major Muslim organizations and leaders. The WEA is now appointing people to represent us in relation to other religions and governments, and, until these people are appointed, either Prof. Johnson or I can go wherever we are needed. Of course, Commissioner Christine MacMillan, our WEA Associate Secretary General for Public Engagement, and Prof. Dr. Johannes Reimer, our WEA Director of Peace and Reconciliation, are also available and will be eager to lend their considerable expertise.”

The conference, held at the historic and beautiful Pontifical Academy of Social Sciences in Vatican City, was attended by three Roman Catholic Cardinals, multiple Roman Catholic Archbishops, a retired President of the European Commission, a senior representative of the United Nations, a representative of the Nobel Peace Prize Committee, a representative of the Archbishop of Canterbury, along with senior Roman Catholic scholars and representatives from most of the world’s major religious traditions. In his speech Johnson claimed that “Conflict seems to happen by accident; peace requires initiative.” Citing Matthew 18:15 he noted, “To restore peace, we must bring justice and mercy together as teammates. And showing mercy or forgiveness always requires personal initiative. Someone has to break the cycle of conflict by taking the initiative to practice mercy and forgive. This is what, we Christians believe, God is doing through Jesus Christ. He offers us mercy, leading to peace with God, without waiting for us to earn it. The same principle must be applied to our human relations.”

This conference is part of a new multi-year initiative in response to the perception that religious persecution, religious violence, religious extremism, endless wars in the Middle East, and the related refugee crises are not only at extreme levels but could lead to further wars. This set of problems seems to be connected with the problems of human trafficking and corruption. The two-day meetings will be held once every three months, usually at the Vatican. They are being led by the Pontifical Academy of Sciences, the Pontifical Academy of Social Sciences, Religions for Peace, the University of Notre Dame, and the UN Sustainable Development Solutions Network.

Prof. Thomas K. Johnson is the author of “Human Rights: A Christian Primer,” one of the world’s more widely read single-author books defending human rights. The second edition was jointly published in 2016 for the WEA and a Vatican-based think tank. In December 2016, he was honored for his international human rights efforts with a knighthood from Prince Gharios El Chemor of the Sovereign Imperial and Royal House of Ghassan, the only Christian royal family from the Middle East.