My host touched the ‘down’ button in the elevator of a high-rise apartment. Its door opened and we stepped out into underground parking.  We maneuvered around cars and crates in the musty and dark basement. Then to my surprise, I saw through an ajar door a red cross with children’s toys scattered about. The pastor welcomed us into his ‘house church,’ a small room seating 70 adorned by a small pulpit.

Later that day across the city – in China there are more than 40 cities with populations over 5 million – we visited another ‘house church.’ On the side of a commercial building was a cross, publicly announcing the church’s presence. Arriving on the sixth floor we exited to an amazing 7,000-square- foot complex fitted with multiple offices and a 600-seat auditorium.

Saturday night in another city, my translator punched in floor five. We were greeted and shown a spacious sanctuary seating 350, its platform lit with colored floodlights as the worship band prepared. Just down a hall I poked my head into its seminary facility.

Sunday, again in a high rise commercial building, I spoke to two congregations, who met in a 120 seating worship center, surrounded by Sunday School rooms.

Monday I rode a high-speed train to yet another city where a young couple took me to a commercial high rise. Meeting with a dozen of their senior staff, they told me that in 2016 the government shut down their former rental space in preparation for the meeting of the G20. The police rationale was they wanted all unregistered (aka ‘house churches’) churches closed so as to prevent protest. A year later this same church was up and running in a new rental space with multiple staff and a worship area for 75, housing two house churches.

Three Self Churches are Protestant churches registered with the government. The government pays for many of their buildings and funds the education of its pastors. They are public many located in urban areas, often with spectacular architecture, sometimes with congregations of a few thousand.

House churches – formerly referred to as ‘underground churches’ – are smaller who in the past mostly met in homes to escape the control of the police. Today, at least in the city areas, they are larger – between 50 to 600 attendees – and most often rent space in commercial buildings. They are not registered with the government, and in most cases, not allowed to own a building or buy in a commercial space. They get no money from government and in some cases are harassed and even shut down. At the same time there are still many small groups who meet in homes.

The Three-Self journey
Early missionaries to China, concerned that the Gospel would become a Western import, formulated the idea that for the church to become strong it should be run by nationals, managed in three areas: in evangelism, in leadership and in funding. This became known as Three Self and in time was turned into a government policy and department.

After the Communist Party took power in 1949 and as missionaries were forced out, the church went underground using homes for their meeting place. Mao took the idea of ‘three-self’ and turned it into an organization called the Three Self Patriotic Movement (TSPM) and policy, insisting churches live by the three-self principle and register with government. As windows closed we feared the worst. However after Mao’s death and as China slowly opened, the opposite was true. When the church went underground to survive, the idea of ‘three self’ (of indigenous leadership, personal witness and self resourcing) resulted in a church strong and vibrant. Mao accomplished what he never had in mind: a strong church.

Today
The recent rapid growth of house churches is attributed in part to the 1989 Tiananmen Square fiasco that acted as an accelerator. Students at the fore of the protest lost trust in a government they believed was out to protect and serve their wellbeing. Also this generation had been raised in a society where spirituality in general, and religious faith in particular had been devastated by a secular, materialistic and atheistic government.  For students, skeptical of its government, Christian faith became an attractive option. If Christianity was to be their choice, they had a choice of a Three-Self church or ‘house church.’ Many chose the later.

Observables: to understand the nature of persecution/freedom, keep in mind these realities. 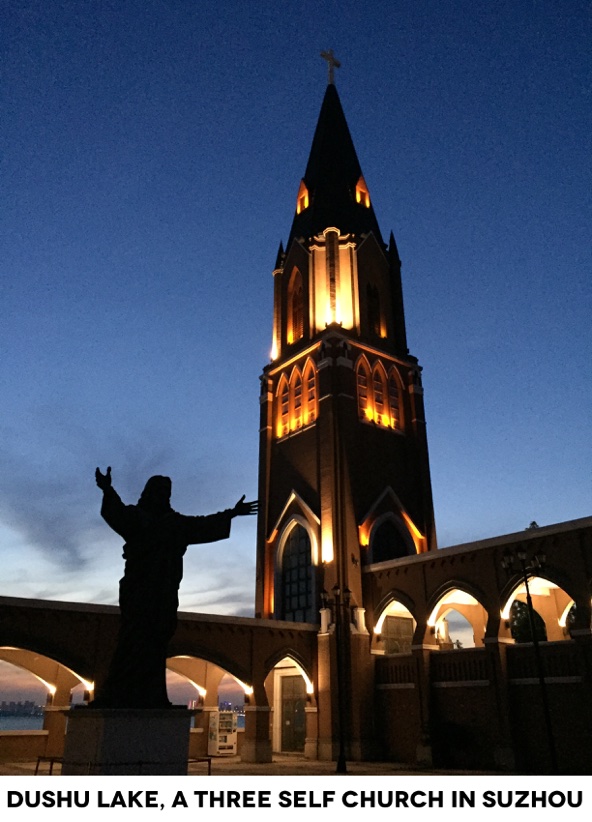 Creative and ubiquitous
We wended our way through an industrial area, avoiding broken bricks and clutter. A cargo elevator took us up three stories: then we walked a couple of flights of stairs and took another elevator. The door opened and there was a spacious and well- designed facility occupying the entire floor.  Two large advertising posters, described a ministry for women with breast cancer, “Touch of Angel Hand,” and a program for senior citizens: like small NGOs.

I was greeted warmly. Some were in Bible study, others in church planning and a few enjoying tea in the church restaurant. This is no small enterprise: two assembly halls seating over 200 – one for foreigners and the other for nationals, and the two dare not mix. This is the headquarters of a church network of twelve ‘house churches’ and its Bible College. The senior pastor told me that he had “tea time” with the police, but they didn’t seem bothered by their existence, as they liked the social dimension of their work.

China continues to change. The enormous and rapid movement of rural populations into urban areas is growing house churches beyond what anyone anticipated. The variety of churches, circumstances, rules and personalities among a people four times the population of the United States makes it almost impossible to cover even the most basic of its spiritual realities, church related groups and patterns of ministry.

What goes on in China matters to the church worldwide: soon it will be the country with the largest Christian population and in time it might have the world’s largest missionary force.

When Jesus said he would build his church, he surely had China in mind.