Swiss EA: Christians Call for More Transparency in Financial Transactions and Tax Policy – A Lot of Money, No One Should Know About

Repeatedly, Switzerland has been criticized for the lack of transparency in the funding of political parties – most recently by the European Council at the beginning of this month. The campaign "StopArmut2015" (Stop Poverty 2015) of the Swiss Evangelical Alliance is disappointed with the reluctant attitude of parliament and government. It calls for more transparency when it comes to political contributions by companies.


The decision of the Swiss Council of States in June and the new rebuke of Europe beginning July show that the political will is still lacking to bring transparency in party financing and to catch up to internationally practiced standards. In Switzerland, it will therefore continue to be possible to “buy” political influence without having to disclose the sources.

“This is particularly problematic for a country that is rightly proud of its grassroots structures”, says Peter Seeberger from the campaign StopArmut 2015. “It is undisputed that large donations to political parties can influence the political process significantly and should therefore be made transparent.”

Once again, politicians choose to protect the economy, but this time they might in fact do them a disservice. "There is a real reputational risk, because Switzerland was already repeatedly criticized by the international community because of this lack of transparency," says Peter Seeberger.

The campaign StopArmut 2015 also points to an open letter that was handed over in Australia to the most powerful heads of states in the world. In this letter, church leaders from 170 countries turn to the G20 governments and call for more commitment against corruption and tax evasion. Corruption robs developing countries 850 billion U.S. dollars every year through illegal financial flows, and 160 billion dollars are lost through tax evasion, the letter states.

The open letter was presented to representatives of the Australian Parliament on June 26 as part of the event "Voices for Justice". Australia has the presidency of the G20 this year and has significant influence which topics are prioritized at the Summit in Brisbane this November.

Theologian Joel Edwards, who presented the open letter, said: "This is the very first time that Christians have stood together against global greed, dubious practices and abuse of power. We know that we encounter corruption everywhere – from soccer to decisions in boardrooms. We want more integrity in public life – resulting from both economic and moral sense. If we fail to seize this opportunity, we let the poor in the lurch. "

"StopArmut 2015" fights on national and international level within the framework of the EXPOSED campaign for more transparency in the area of tax avoidance, tax evasion, non-transparent financial transactions and corruption. 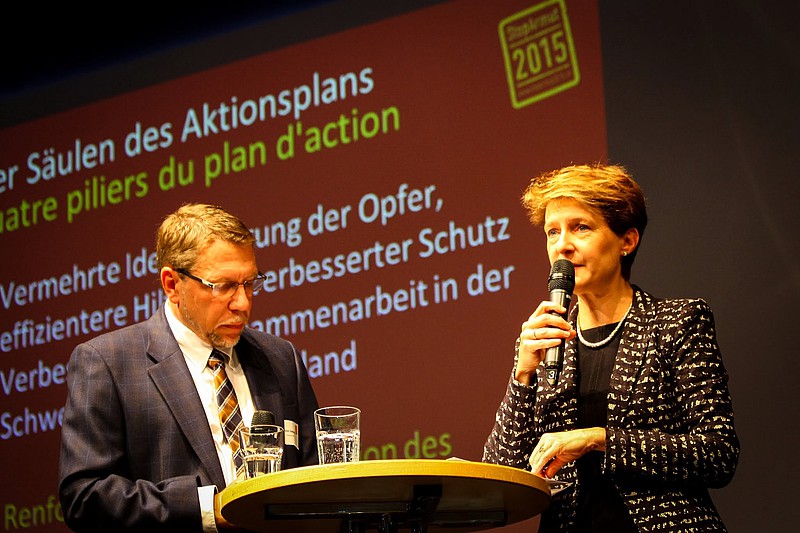 Peter Seeberger (left), Director of StopArmut 2015, and Mrs. Simonetta Sommmaruga, member of the Swiss Federal Council and Head of the Department of Justice and Police, at a Stop Poverty conference in 2013.

For more information about the Swiss Evangelical Alliance, visit www.each.ch.