On 12 October a severe cyclone struck the coastal district of Odisha and Andhra Pradesh in East India, affecting 18 districts and 13.2 million people. Early warning systems and years of community disaster preparedness activities meant that thousands of lives were saved, as communities evacuated in time. However thousands of homes, schools and livelihoods have been demolished, and more than 300,000 hectares of land, along with crop-ready harvests, have been destroyed. Continued torrential rains have caused further devastation, cut off communities and hampered relief efforts … 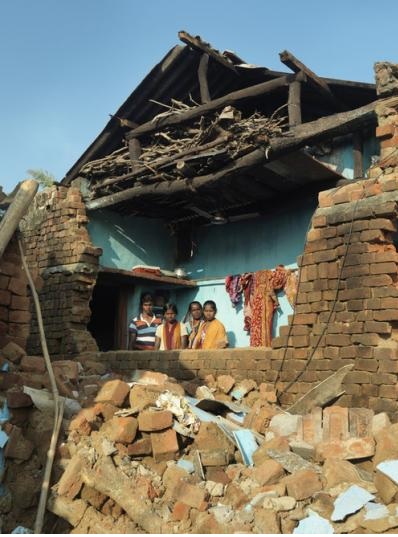 Jan Eyre, Integral’s Programmes and Disaster Management Coordinator says, “An Integral Disaster Response alert was raised for Cyclone Phailin just after impact, and currently six Integral Members are responding to support their common partner EFICOR. The key feature of this Integral response is that Integral Members are liaising with EFICOR through one agency (Tearfund UK) for this disaster, so making things much simpler on the ground for their shared partner organisation, and allowing them to concentrate fully on the essential task of bringing urgent assistance where it is most needed, often in adverse conditions.”

Tearfund (UK), World Relief Canada, World Relief (US), World Renew (USA and Canada), Tear (Australia) and SEL (France) have all given money to support EFICOR’s relief efforts. So far 2158 families have received relief kits, and distribution for a further 683 families is currently in progress in the affected villages of Ganjam district. Many people have lost not only their homes but also their livelihoods …

The cyclone devastated the house of Hari Krishna Sadang, who is from Khatia Ramchandrapur village in Ganjam District. All his belongings, including his small bicycle repair shop, were swept away. Receiving EFICOR’s relief kit he said, “We as a family will never forget EFICOR’s helping hand in our helpless situation.” His family of five can now survive for a month without worrying, whilst he searches for an alternate livelihood.  Another example is Pankajini Sadangi, also from Khatia Ramchandrapur villlage. She was returning after attending her relatives’ funeral when the cyclone struck the village. As a widow, and her son’s carer, her only source of income was from her small shop. The cyclone destroyed both her house and shop. “EFICOR’s relief brought a ray of hope to me and my family,” she says.

EFICOR’s last update stated: “Despite the bad weather the relief distribution progressed smoothly with the help of the community’s efforts and cooperation. The beneficiaries are thankful for the relief materials that would last them for 45 days to help them get back to their normal life. The timely relief distribution was also well appreciated by the government and other agencies.”

Prince David, India Country Representative for Tearfund (UK), has been helping on the ground with distribution of EFICOR’s relief kits.  He says, “The conference call that Integral convened immediately after Cyclone Phailin was immensely helpful in several ways. Firstly, partners, and we on the ground, had an assurance of a global family of praying people. Secondly, it was useful to know what each organisation was thinking in terms of their financial commitments – knowing the approximate available resources fairly early in an emergency situation enabled us to plan well. A couple of Members released funds that were already with their local partner in India, and this had a positive impact on speed of delivery which is essential in any humanitarian emergency. Thirdly, a key benefit of coordination was an agreement to receive a single proposal and finally a single report for all partners.”

Prince continues, “Relationship have now evolved to a point where Integral Members come together to support common partners, and at the same time they maintain their relationship with implementing partners. This has also helped in planning early recovery and rehabilitation as a few Members are interested in investing in communities in the longer term. My hope for the future is that interested Integral Members continue working together beyond an initial emergency response towards rehabilitation and reconstruction.”


Integral Alliance is a WEA affiliate and has served as a global partner to the WEA in the field of relief and development since 2006. Integral contributes to the WEA’s goal of fostering Christian unity around the world through working with its Members on a more integrated and collaborative strategy in disasters.