WEA is delighted to announce the formation of a new Latin Evangelical Alliance (Alianza Evangélica Latina). “The potential of this new Alliance is enormous, particularly in Latin America, with all its energy and large numbers of evangelicals, but with enormous social, political, economic and spiritual challenges,” says Gordon Showell-Rogers, Associate Secretary General of the World Evangelical Alliance. 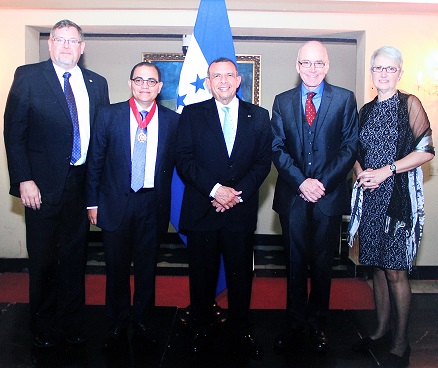 The new Alliance has sent the following release:

"Representatives from 21 countries have just met in Tegucigalpa, Honduras for the Ibero-American Forum for Evangelical Dialogue (FIDE). At this meeting, FIDE has been transformed into the LATIN EVANGELICAL ALLIANCE (LEA), designed to represent all Latin American Evangelical Alliances, and strengthen evangelical unity in Spain and Latinos in the United States.

The event was attended by Gordon Showell-Rogers and Rob Brynjolfson, Associate Secretary General and Director of the Leadership Institute of the World Evangelical Alliance. The WEA welcomed the establishment of the new Alliance and offered its full support.

The Latin Evangelical Alliance is to be an instrument of unity, and aims to:

At this gathering the Board, was chosen and Pastor Alberto Solorzano was appointed as President. Pastor Solorzano is the current President of the Evangelical Fellowship of Honduras and the Evangelical Confederation of Central America. Pastor Solórzano will work with a Secretary Agustin Aguilera (Bolivarian countries), and Cirilo Cruz (Mexico), Jorge Taverna (Uruguay) and representatives from Spain, Brazil and the USA."