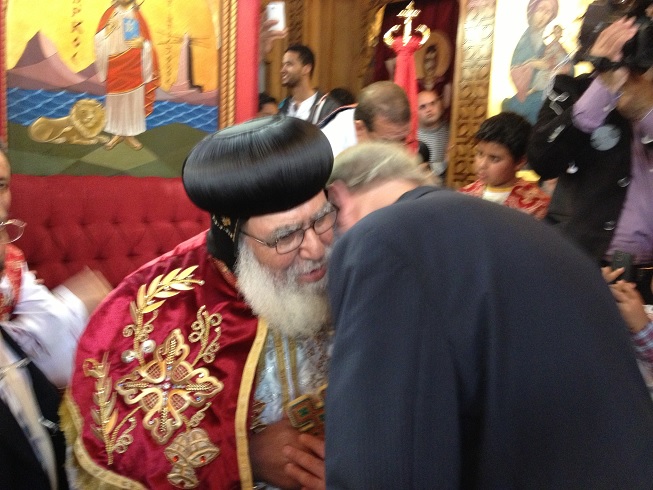 The Ambassador for Human Rights of the World Evangelical Alliance, Dr. Thomas Schirrmacher, attended the installation of the new Coptic bishop in the German state of Hessen. In his speech during the worship service, immediately after the installation, Schirrmacher described the Coptic Church as the oldest church in the world that has been a shining example of holding fast to faith in Jesus while enduring pressure, persecution, and martyrdom, from the first centuries of the church, during a thousand years of Islamic rule, and in the middle of the current chaos in Egypt.

The Coptic Church has long represented the global church of Jesus Christ in the way in which it has paid a high price for the faith. He called on the world fellowship of Christians, as well as on all countries of the world, to actively support the Coptic Church and to promote a peaceful future for the Copts in Egypt. He also praised the Copts in Germany for their serious contribution to social integration. Already several decades ago the Copts developed a program entitled “Mommy speaks German.”

Schirrmacher also warned the Copts living in Europe not to throw away their faith in redemption in Jesus. “It would be a tragedy if families who have maintained their Christian faith during many generations of persecution would throw their faith overboard as soon as they experience freedom in the West.”

Bishop Michael thanked Schirrmacher for his moving words. “He spoke to us as Coptic bishops from the depths of his heart. The belief in salvation in Jesus Christ is intended for all people, and we want to be a witness to the people in Europe who no longer believe.”

Bishop Anba Damian, who was until this time the only Coptic bishop in Germany, explained that his diocese had to be divided because of the strong numerical growth of its members. In light of their numbers, it would be better for the church in Germany to already have four bishops, it that were possible, in order to properly care for the churches and members.

As Schirrmacher explained to the media, this installation of a new bishop is part of a very constructive program of the new Coptic Pope, Tawadros II, who was installed in November 2012, that recently was introduced to a gathering of European Coptic bishops and priests in Vienna. The plan is to develop more dioceses, each with its own bishop, because many dioceses are too large. All the parts of the Coptic Church in Europe, which previously were led directly by the Coptic Pope in Cairo, should receive their own leadership, so that the national and regional church leadership is closer to the local churches. Schirrmacher thinks this step could lead Coptic Christians to become a global Christian fellowship.

Previously Schirrmacher received extensive reports about the situation in Egypt from five bishops from Egypt.

The invitation to the installation was received via the Internationale Gesellschaft für Menschenrechte, (the International Society for Human Rights, IGFM) of which Schirrmacher is a board member. The IGFM has long been involved in protecting human rights in Egypt and has many Coptic Christians as members. Dozens of Coptic IGFM members from across Germany took part in the bishop’s installation.

The property for the Kröffelbach cloister was purchased in 1980. The new church was dedicated in 1990 and was the first Coptic Church in Germany designed and built entirely in the ancient Coptic style. The Institute for Coptic-Orthodox Theology, established in 2002, now has 50 men and women studying toward a four-year degree. Priest Abuna Michael El Baramousy, now Bishop Michael, helped with the development of their theological institute and with the building of the church. He has supported active ecumenical relations for decades.