“Religion is part of one's personality. It is not like a car so that you arbitrarily can restrict its use from time to time,” claimed Dr. Thomas Schirrmacher in a lecture in Brazil’s Supreme Court. The lectures were attended by about 400 congressmen, members of the government, government staff, representatives of public authorities, heads of Christian churches, leaders of other religions, and the leadership of the Christian legal association ANAJURE.

Schirrmacher is the Rector of Martin Bucer Seminary, including its Brazilian branch, Executive Director of the International Institute for Religious Freedom, and Ambassador for Human Rights of the World Evangelical Alliance.

ANAJURE opened the First International Congress on Civil Liberties at the auditorium of the Brazilian Supreme Court with the theme “Freedom of Expression and Conscientious Objection.” The lectures were given by Dr. Thomas Schirrmacher and Dr. Jonatas Machado, Professor for Constitutional Law at the University of Coimbra, Portugal, and moderated by Prof. Dr. Uziel Santana from the University of Aracaju and president of ANAJURE.

Dr. Machado lectured on “Constitutional and State Religious Neutrality between Theism and (Neo) Atheism,” and on “Freedom of Expression, the Clash of Worldviews and Hate Speech.”

Among the officials present was the Chief Minister of the General Secretariat of the Presidency of Brazil, Gilberto Carvalho, who represented the President of Brazil. Minister Carvalho stated that the state and the government should be guardians of religious freedom and freedom of expression through laws and constant vigilance so that these freedoms are not hurt because they are important achievements of society. The minister also stressed that the Brazilian government is aware of the issues presented by Schirrmacher and Machado. “My presence at this event is our recognition of this initiative, as it helps in construction and consolidation of respect for one another.”

Afterwards, Schirrmacher and Machado, together with a delegation of ANAJURE, visited the Supreme Federal Court in Brasilia and met the Judge and Minister Gilmar Mendes, who just finished his term as president of Brazil’s constitutional court. Minister Mendes recognized the relevance of the topics. He suggested organizing an even larger international academic conference on religious freedom in the Supreme Federal Court. 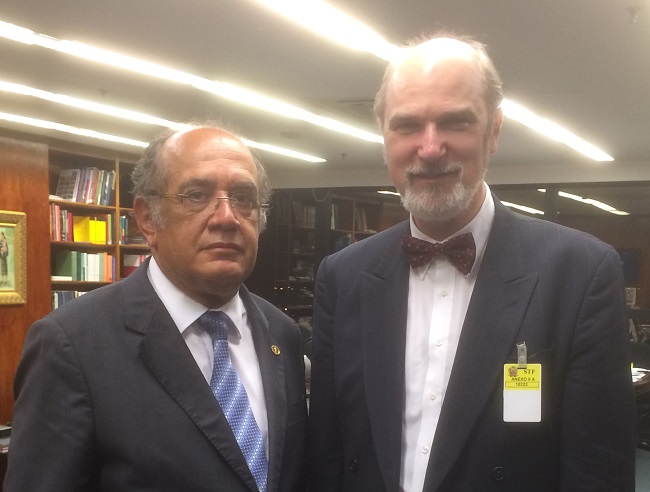 Later Dr Santana commented on the events with the following words: “The presence of ANAJURE in the Superior Court of Justice and Supreme Federal Court demonstrates that our struggle in defense of fundamental civil liberties is most important in a democratic state, and that our judiciary knows this issue should be discussed and analyzed in our country. We have found an echo and support in all three powers of our Republic, as well as in civil society and in our churches. We thus fill a gap that is still existing in Brazilian evangelicalism.”

The day after speaking at the First International Congress on Civil Liberties at the auditorium of the Brazilian Supreme Court, Dr. Schirrmacher and Dr. Machado gave a double guest lecture on “Religious Freedom as a Fundamental Right: Report, Theories and Challenges.” The lecture was at the invitation of the Faculty of Law of Universidade Presbiteriana Mackenzie in Sao Paulo, together with the Christian legal association ANAJURE. Among the 500 listeners in the auditorium of Mackenzie University were also several professors of other faculties of the university.

In his lecture Schirrmacher praised Brazil because the country made a rather quick transition from a country with an overwhelming state religion with a significant intermingling of majority religion and politics towards a country with one of the best records concerning religious freedom. The newest study by the PEW Research Center proves that Brazil has better grades regarding religious freedom than the USA and the best grades of the twenty countries with the largest number of inhabitants worldwide.

Schirrmacher emphasized that careful social scientific research has demonstrated that a country suppressing or exiling its religious minorities hurts itself economically and in other ways, while taking in refugees from religious minorities is in the interest of any country. As a German, Schirrmacher noted that the harm and cost of killing and driving out the Jews from Germany was so high for Germany that it cannot be calculated, whereas receiving many of those Jews helped the USA to become the leading super power. Prussia became a major power in Europe partly because the Prussian king invited everyone in Europe who was persecuted or exiled because of religious affiliation to come to Prussia. He offered them freedom of religion and freedom from being taxed for a time, if they would help to make his land arable and build up Prussia.

After the lectures, there was a public debate with the two speakers and Prof. Dr. Uziel Santana on “Political and legal issues of religious freedom in the Brazilian and international context.” Asked by listeners what he thinks about the secular, neutral state more and more suppressing conservative Christian moral positions, e.g. on abortion, marriage or sexual orientation, Schirrmacher stated that this is not the work of a neutral state but the work of a state that is misused by liberal Christians and adherents of certain atheist worldviews which is suppressing more conservative Christians.

The Universidade Presbiteriana Mackenzie is a private university in São Paulo, Brazil with 44,200 students. Founded in 1870 as the American School, Mackenzie is one of the oldest institutions of higher education in Brazil. The university is regarded nationally and internationally as a center of excellence having graduated numerous important names of Brazilian history. Apart from its main campus in São Paulo, Mackenzie University has campuses in Barueri, Brasília, Campinas, Recife and Rio de Janeiro. The nickname “Mackenzista” is often used to refer to current or former Mackenzie students, as many of its alumni regularly enter state service.

Following speaking at the Supreme Court and Mackenzie University, Schirrmacher opened the new academic semester of the Brazilian branch of Martin Bucer Seminary with 20 new students whom he welcomed with a sermon on Romans 12:1-2 in the Igreja Batista da Graça (Grace Baptist Church) in São José dos Campos, the neighbor city of São Paulo. The pastor of this church, Gilson dos Santos, is chair of the board (“Conselho”) of the Brazilian Seminário Martin Bucer. Other members of the board are the dean and professor of Systematic Theology, Mr. Franklin Ferreira, and Mr. Matias Heidmann.