Haiti, a Place of Wide Gaps – by Dr. Brian Stiller

Few countries display such extremes, from pervasive poverty to stores with most anything one could want; from literacy rates of fifty-five percent to the well educated; from curious and troubling religious practices to the inspirational and rigorous.

Haiti can be breathtaking in its beauty, yet troubling in its squalor.  Less than a two-hour flight from south Florida, this country with African roots defies adequate description and self-evident reasons for its struggles and conditions.  To understand Haiti, it must be felt.

Its long history includes one of the most astonishing military feats in history.  In 1803, its ragtag army, kicking out Napoleon’s military, was the first army of its kind to successfully defeat a colonial power.

Of course, its recent history of brutal dictatorship—from Doc Duvalier to Papa Doc—stigmatized this Caribbean country; and even today, while ruled by an elected government, its ability to operate as a democracy is fragile.

The cataclysmic earthquake of 2010 ripped open the earth, toppling buildings and resulting in the death of a quarter million.  Then as Haiti was lifting itself up by its bootstraps, two years later Cyclone Isaac blew its monstrous wind and deluge of rain, destroying much that had been rebuilt.

One so quickly falls in love with Haiti’s people, with the noisy tap-taps, vibrant colors, and pot-holed roads.  So much like parts of its African homeland, this land and its people rise even in tragic moments with hope, resolute determination and faith.

I first set foot in Haiti in the early 1970s, when I was producing films.  Today I find her much the same, yet so different.  Tent cities planted after 2010 are almost gone.  Only those who know where to look see physical memories of floods.  The will to remake, reconstruct and renew is boundless.

What catches my attention is the work of Christian leaders and the rise of young people who are moving this “pearl” (the name of my first Haitian film) from the underwater of its past to the surface, manifesting their spirit to make this island country a place of beauty.

Few countries are more religious than Haiti.  Christianity arrived on its shore in 1630, first by Catholic missionaries and then Protestants missionaries in 1807.  Imbedded in its heritage is voodoo, a reworked African understanding of the world of spirits, of good and evil that permeates the country.  Criticism of the Roman Catholic Church is that they permit syncretism, the wedding of Christian faith and voodoo.  Leveled against Evangelical Protestants is that personal salvation is often its only message.  Both criticisms can be overplayed but valid in their premises.

This Sunday morning, streets are filled with pretty girls with colorful ties in their hair and wearing frilly dresses.  Boys looking smart in Sunday clothes who, along with their families, are off to church.  Estimates are that the Evangelical community is between twenty and fifty percent of the population.  No one dares claim accuracy.

The story that matters is the resolute force of churches and of Christian mission to apply all that Jesus came to do, in this setting.  Out of the thousands of churches in a population of 9.7 million, so many have their own schools.  Professionals may complain of the unevenness of standards, but without these church schools, millions would grow up with no education.

Alongside education are the medical ministries, Christian clinics and hospitals created and funded by missions and churches, doing what government cannot.  In this world of topsy-turvy political maneuvering, it is this Christian presence in education and health ministries, which imbeds ballast in a ship too vulnerable to cultural and physical storms.

The vital factor of today’s Church in Haiti is its leadership.  These bright minds, schooled in the academic and in the world of experience, are not looking for prosperity or ease of living elsewhere.  Nor are they naïve.  Their analyses are clear, unapologetic and unvarnished.  They know the odds.   They live in “catastrophic alley” where storms will smash over their world again.  Corrupt politicians will rob their citizens blind.  The power of voodoo will continue to mislead many.

Even so, driven by a call, raised in hope by faith, these younger leaders create, build, lead and comfort, always moving forward, doing what good leaders do.  Out of many possible examples, here are three. 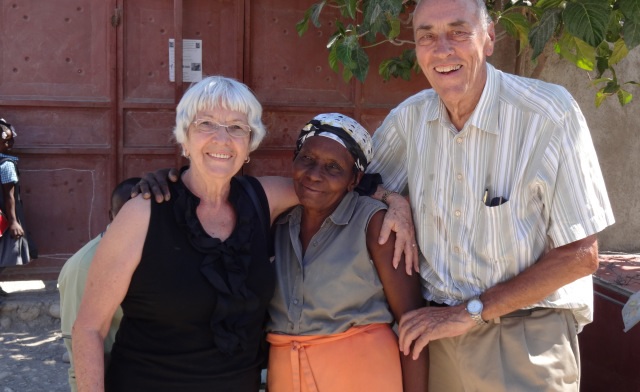 For over thirty years, Ian and Alice Marie Van Norman have been coming to Haiti for up to six months each year, building schools, a hospital, centers of ministry, churches, and now helping with a university.   Entrepreneurs in their own land, they have given from their resources and at times were matched by their business friends.  As Lily and I drove the dusty roads and walked the muddy streets with them, we watched as the Van Normans arrived in the places of their beneficence.  They were greeted with wide smiles, bear hugs, giggles and faces alive with recognition, as the children sought to hold their hands.  We stood by teary-eyed.  They have brought much more than money to Haiti. They have given years of their lives to people they have come to love.

If you live in North America, plan on a visit to Haiti.  Don’t let your life go by without seeing first-hand the life and energy of Christian faith in this land of wide gaps.  For holding the disparities together is the One who is before all things and in whom all things hold together.   That’s what the Apostle Paul said about Jesus in his letter to the Colossian church.   It’s still true.