IIRF Welcomes and Endorses Extensive Mention of Freedom of Religion in the German “Grand Coalition” Multi-Party Government Agreement: “Our Expectations are High!”

The International Institute for Religious Freedom (IIRF) is delighted to see the frequent mention of freedom of religion in the grand coalition agreement among German political parties which will shape German policy in the coming years. International religious freedom is mentioned three times as a foreign policy priority of the new government. This should play an important role in at least three areas: The negotiations of Turkey, with an ambiguous history regarding religious freedom, to join the European Union; foreign policy in relation to the countries of the largely failed “Arab Spring,” which have not consistently written religious freedom into their new constitutions; and a fundamental orientation to support human rights on an international level. It is especially welcome that persecuted Christians are explicitly mentioned. Too often the rights of religious minorities in lands with majority religions are neglected, so that Christians are sometimes seen as an undesired minority.

Dr. Thomas Schirrmacher, director of IIRF, noted, “The grand coalition of the first Merkel cabinet (2005-2009) was the first to make religious freedom and an offensive engagement for persecuted Christians a central theme in foreign policy. This included efforts in the human rights committee of the German parliament. This was continued in a pleasing manner in the black-yellow coalition of the second Merkel cabinet (2009-2013), even if the smaller coalition partner was not able to contribute heavily to religious questions. The third Merkel cabinet (just started), with the same foreign minister as the first Merkel cabinet, now has the opportunity to build on their previous achievements and even more decisively make religious freedom equally important with other human rights. Our expectations are very high, that freedom of religion will be supported in both domestic and foreign policy, including the willingness to directly address religious discrimination and the persecution of Christian minorities.” 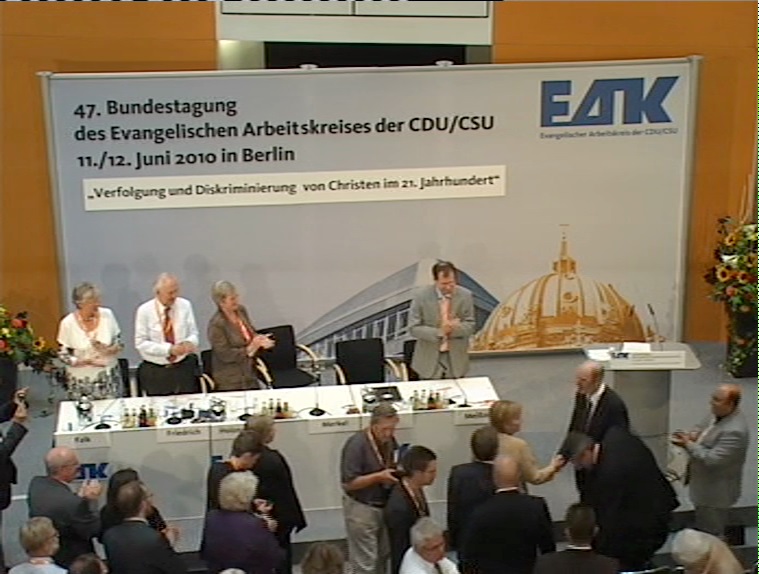 Mrs Merkel greets Dr. Schirrmacher as he lectures in her parties headquarter on persecution in 2010

Schirrmacher added that it is noteworthy that the right to change one’s religion is explicitly mentioned. If fully implemented, this should lead to specific protections for religious converts among applicants for asylum. It should also emphasize, in the context of bilateral foreign policy discussions, that the right to change religions is an integral theme of the long recognized international catalogues of human rights, so that changing religions may not be punished with criminal or social penalties.

Thomas K. Johnson of IIRF added, “It is extraordinarily welcome when religion is moved from being one side in a culture war to become an important theme of a multi-party agreement in civil society. If only other states could embrace such principles in their constitutions and social contracts! The fundamental respect for the other expressed in true freedom of religion leads to such wide-ranging benefits in society that it should become a long term foreign policy priority, regardless of one’s political party. The other democracies really should imitate the German initiative if they are concerned with the common good of their neighbours.”

The three references to religious freedom in the German coalition agreement: