Religion and Politics in a free society

Since the terror attacks in Paris at the beginning of the year, themes such as the relation of foundational democratic values with religions, as well as religious fundamentalism and violence, have increasingly moved into the center of public discussion. In the framework of a public discussion in Brussels, held jointly by the Robert Schuman Foundation, the Forum Brussels International, and the Hanns Seidel Foundation, a group of experts and advisors offered their insights to 150 leaders, especially senior staff of the European Commission and the European Union, members of the European Parliament and Ambassadors of several dozens of countries, mainly from Muslim majority countries.

The Ambassador for Human Rights of the World Evangelical Alliance, professor Dr. mult. Thomas Schirrmacher, explained how fundamentalism develops. Dr. Khalid Hajji, General Secretary of the European Council of Moroccan Ulema (Conseil Européen des Ouléma Marocains), went into aspects and consequences of violence and radicalization in the context of migration into postmodern Europe. Katharina von Schnurbein, coordinator for dialogue with religions of the European Commission, presented an overview of the contributions of European institutions toward overcoming extremism, while Prof. Agdurrahman Mas’ud, general director of the Ministry of Religious Affairs in the Republic of Indonesia, reported on the experience of his country with fundamentalist movements. Isabel Guzmán, Brussels correspondent of the German Protestant Press Service (Evangelischer Pressedienst), served as moderator. 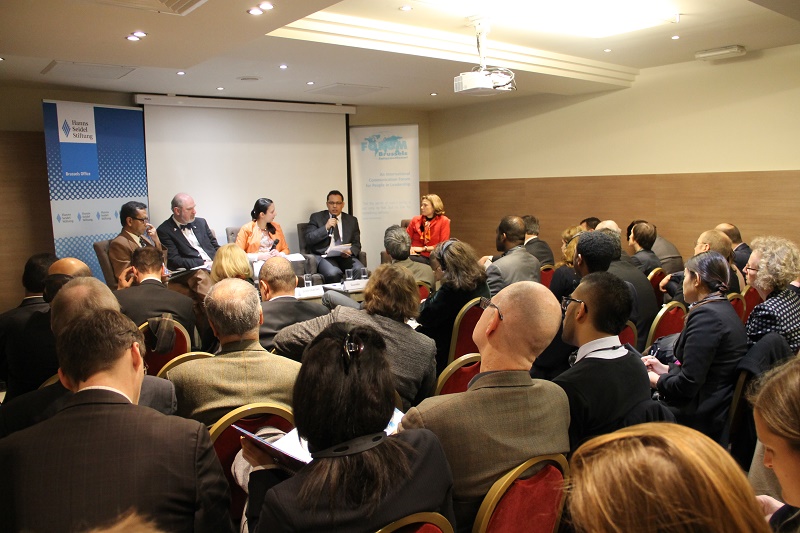 Prof. Schirrmacher identified intolerance and absolute truth claims, when paired with the willingness to use force or psychological manipulation to enforce those truth claims, as the primary causes of violent fundamentalism. It is not religion itself, he said, that is the problem, rather the tendency to use violence as a means to attain religious goals, in place of convincing people by means of persuasive arguments regarding religious matters. The early recognition of such tendencies is a duty of every individual in their respective communities. An immediate and unmistakable reaction within the respective faith communities is essential both to protect their own values and to restore the credibility of the faith community. For Dr. Hajji, the battle against political radicalism is no less indispensable than the battle against religious radicalism. The current danger for Europe, he said, is precisely that the two varieties of radicalism (political and religious) tend to feed off each other and react to each other.

The participants in the panel discussion were unified in the conviction that the protection of freedom of religion and other human rights, along with cooperation and peaceful exchanges among faith communities, could make an important contribution to overcoming violent fundamentalism. Von Schnurbein explained the holistic approach of the European Commission, which includes the “Radicalization Awareness Network” (RAN) as well as a working paper on the protection of victims of extremism and hate crimes which should be presented in November, 2015. According to Prof. Mas’ud, only about 500 “Foreign Fighters” from Indonesia have joined Islamist terror militias. This number is small in comparison to fighters emanating from European countries, and especially so in light of the fact that 87% of Indonesia’s 200 million inhabitants are Muslims. Mas’ud connects this fact with the way in which the principles of tolerance, compassion, and love of neighbors are firmly anchored in Indonesian social values, which are both communicated and embodied by a strong organizational culture of civil society. 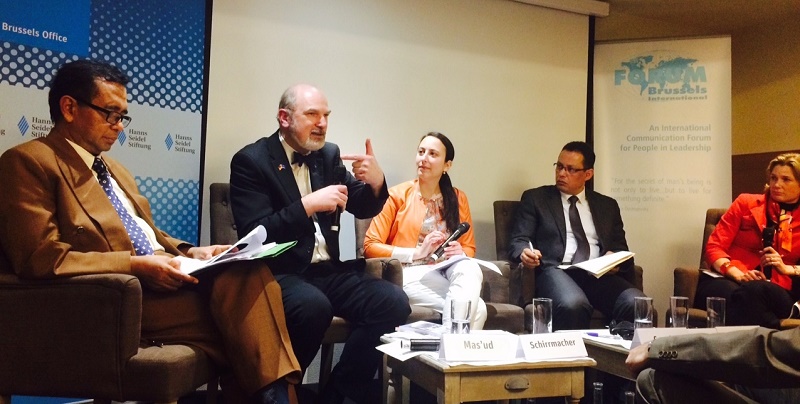 Prof. Schirrmacher reported on the increasing and dangerous world-wide tendency toward religious nationalism, which equates membership in a majority religion with nationalism. Religion is misused for the sake of creating political identity while simultaneously excluding other groups from political influence. The main problem is the related decline in tolerance toward religious minorities. As examples, Schirrmacher mentioned developments in India, where the equal treatment of all religions guaranteed by the Indian constitution is being called into question by the ruling Bharatiya Janata Party, and Turkey, which is increasingly distancing itself from its own principles of distinguishing religion and government.