Prof. Dr. Thomas K. Johnson, Ambassador of the World Evangelical Alliance to the Vatican, met recently with His Excellency, Archbishop Ivan Jurkovic, Apostolic Nuncio (ambassador) and Permanent Observer of the Holy See at the United Nations in Geneva. They discussed how to develop Evangelical/Roman Catholic cooperation in response to the horrendous persecution of Christians in recent years, and especially how to do so through the institutions of the United Nations. They considered the significance of John 13:34, 35. Jesus said, “A new command I give you: Love one another. As I have loved you, so you must love one another. By this everyone will know that you are my disciples, if you love one another.” Jurkovic used the terminology of Pope Francis, talking about the “Ecumenism of the Martyrs” and the “Ecumenism of Blood,” that Christians from different heritages are dying together as martyrs without those who do the persecuting knowing if the Christians they are persecuting and killing belong to Catholic, Evangelical, Orthodox, or Oriental Orthodox churches. Johnson used terminology taken from Francis Schaefer, speaking about how the watching world will evaluate Christians’ claims to be disciples of Jesus by means of asking if there is observable love among people who are called Christians, especially in the face of persecution and even across different traditions. He said, “God has thrown us into one boat of persecution together. We have to learn how to love each other. It is a test.” 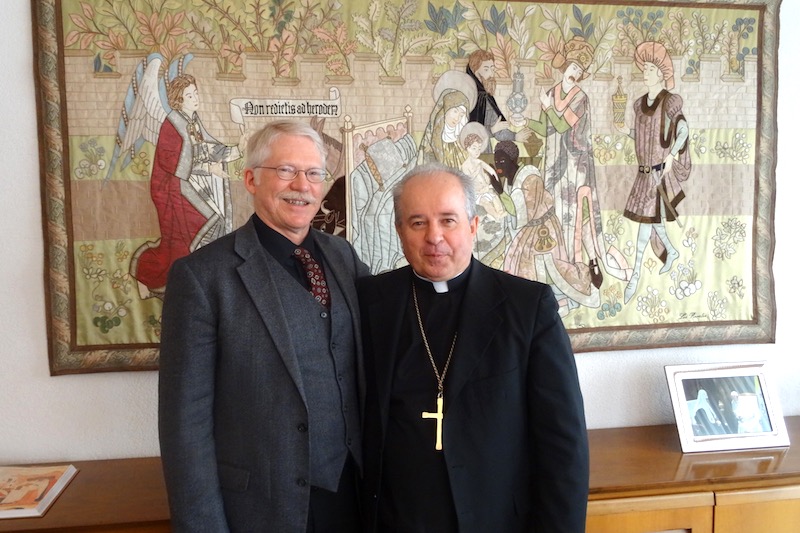 In their meeting, Dr. Johnson gave Archbishop Jurkovic the newest edition of Johnson’s Human Rights: A Christian Primer, along with several other books in the Global Issues Series published for the WEA. Archbishop Jurkovic came to his current role with a background as a Vatican diplomat in several countries. Dr. Johnson came to his current role, as an ambassador of the WEA Office of Intrafaith and Interfaith relations, with a background as a professor of ethics, including human rights theory.

After the meeting Johnson commented about the photo taken with the Nuncio: “I stood directly shoulder to shoulder with Archbishop Jurkovic in the hope that this is how Evangelicals and Roman Catholics will stand together in the face of persecution.”