From February 9-13, the World Evangelical Alliance (WEA) held its annual International Leadership Forum (ILF) in Tegucigalpa, Honduras, bringing together some 75 Christian leaders from 40 different countries from every region of the world. Representing a cross-section of the WEA’s constituency, the purpose of this year’s ILF was to accomplish greater clarity in vision, missional activities, and organizational structure in order to strengthen collaboration throughout the WEA.

The theme “May we be one, so the world may know” reflected WEA’s purpose of fostering the unity of evangelical churches and believers around the world, fulfilling Jesus’ prayer as recorded in John 17. Participants included members of the International Council, the Executive Team, representatives of the various Commissions, Initiatives and Task Forces, Regional and National Evangelical Alliance leaders and Global Partners.

“The ILF2015 was a global gathering of different parts of the WEA family, many of whom had never met before, or attended a meeting where peer leaders of the WEA’s constituency gathered in this way,” said Dr. Rob Brynjolfson, WEA’s Director for Strategic Programming, who led the preparation for the ILF.

The ILF2015 was the first time that such a WEA event was hosted in Latin America, made possible by the gracious support of the Confraternidad Evangélica de Honduras (CEH) whose President, Rev. Alberto Solórzano, currently also serves as the President of the Alianza Evangélica Latina (AEL), the youngest Regional Evangelical Alliance that was formed in 2013. CEH and churches across Honduras have generously given in order to cover accommodation, in-country costs and several airfares for leaders from Africa, the Caribbean, and Latin America to enable them to participate. 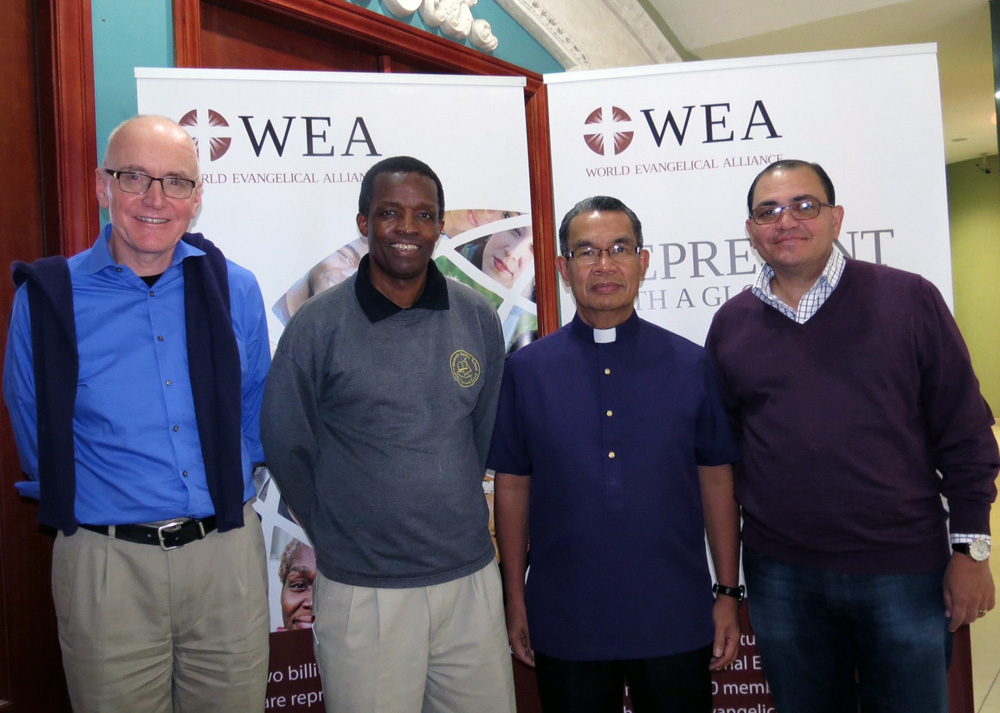 Simultaneously with the ILF, the CEH also held its annual national assembly at the same venue, allowing for a joint opening ceremony on Monday. In addition to ILF participants, some 200 representatives of CEH members, and several government officials participated, and the Honduran First Lady was welcomed as special guest. Recognizing the CEH’s many contributions to society, its leadership was honored with several government awards, including anti-corruption, education, prevention, and others.

Engaging in a Digital Conversation

The ILF then started with a program featuring devotions, presentations, table conversations, and evening group meetings. “It was a guided time of intense interaction and conversation, as we discussed our shared vision and purposes and ways to more effectively achieve them,” Dr. Brynjolfson said.

A significant amount of time was spent in table group discussions that followed each presentation. Feedback from each table was continuously sent to the ‘Digital Conversation’, an IT platform that allowed presenters to follow the conversations and come back at the end of the session with some of the thoughts that were shared by participants. 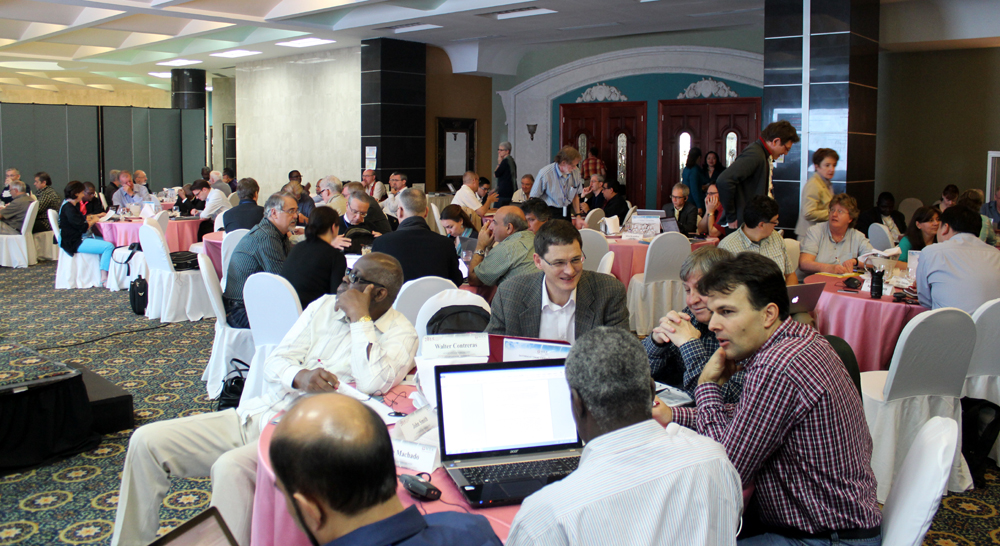 A significant amount of time during the ILF was spent in table group discussions.

“It may have been a surprise for many participants as they discovered how much time we gave to discussion and conversation,” Dr. Brynjolfson commented. “Not only did the presenters re-engage at the conclusion of plenary sessions demonstrating how the table discussion feedback was received and processed, but the entire table conversations were recorded online in our digital conversation forum and synthesized and grouped according to themes.”

On Friday, the ILF wrapped up with a summary of the conversations completed under each theme, inviting participants to commit to contributing to the post-ILF work that will implement the outcomes.

“In all, I think that we came very close to fulfilling our desired outcomes and believe that in terms of connecting and talking about our work in the overall WEA family, this was a successful encounter,” Dr. Brynjolfson said.

A highlight of the ILF2015 was the Friday evening closing ceremony. Bishop Ef Tendero who was announced as the new Secretary General earlier this year, was officially installed as the new leader of the WEA.

Rev. Ndaba Mazabane, Chair of the International Council and acting Secretary General, opened the installation ceremony by introducing Bishop Ef to the WEA family. Then Dr. Bill Taylor blessed him for his new role, and Dr. John Langlois, Dr. Brian Stiller, and Dr. Ramesh Richard prayed for him and his family. 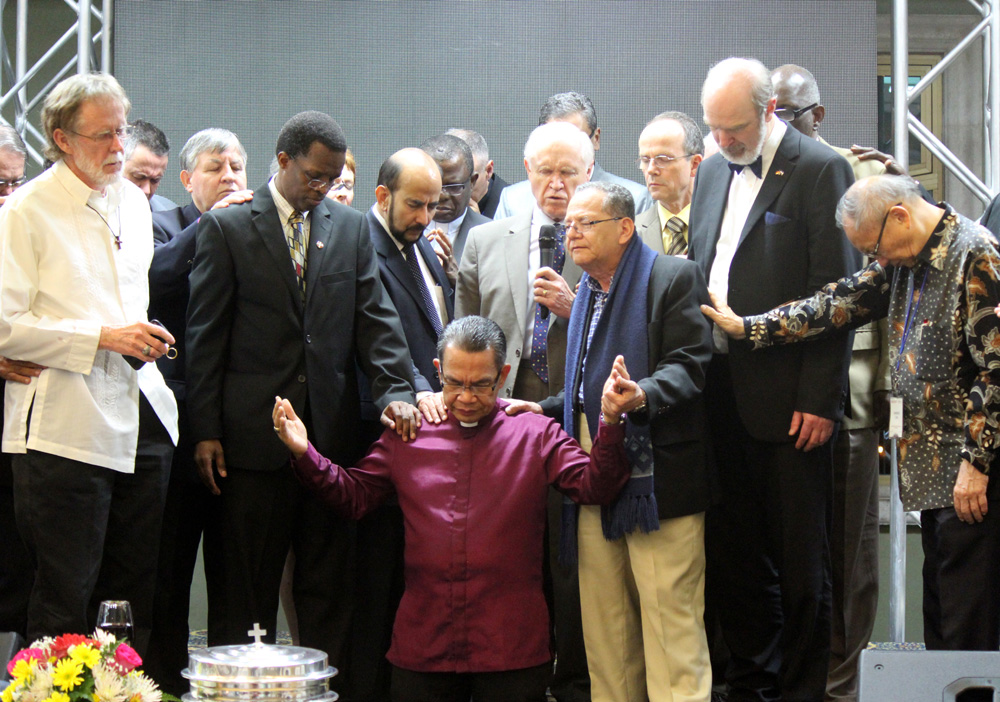 Bishop Ef Tendero was commissioned as the new Secretary General of the WEA during an installment ceremony at the ILF.

Bishop Ef who was present throughout the week, listening and engaging with participants, thanked the International Council, the WEA leadership and the constituency for the trust given to him and promised to be a good steward of this trust as he begins to take on his responsibilities next month.

Reflecting on his appointment, he shared: “When I was asked to become the next Secretary General, a main reason that I accepted the task was the clear purpose of the WEA. It is very difficult, even impossible, to guide an organization that doesn’t know the reason of its existence. But when there is an organism with its foundations in the purposes of God: furthering the witness of Christ, strengthening the Church and pursuing holiness; then the difficult again becomes possible. All of my ministry is serving the Church so that the Church will be used by God to transform and disciple the nations.”

The ILF2015 brought together some 75 Christian leaders from 40 different countries from every region of the world.