Every year, the Commission on the Status of Women (CSW), commissioned by the United Nations (UN) Economic and Social Council (ECOSOC), is held at the United Nations Headquarters in New York. Member states, UN agencies and non-governmental organizations (NGOs) participate in the CSW to evaluate the development on gender equality and the advancement of women, to promote awareness, identify obstacles and challenges and to intensify the progress and work of women around the world. This year, the World Evangelical Alliance (WEA) actively participated during the two-week commission by attending numerous meetings on gender issues as well as hosting its own event.

On March 10th, the WEA alongside Water is Basic and the Permanent Mission of South Sudan to the UN held an event titled “Women and Water in South Sudan” at the UN in New York as a contribution to the 58th CSW. The speakers included Ambassador Francis Deng the Permanent Representative of the Mission of South Sudan to the UN, who spoke on behalf of Minister Awut Deng Acuil, Minister of Gender, Child and Welfare of South Sudan, Ms. Kenza Robinson a gender and water expert from UN Department of Economic and Social Affairs, Ms. Kathy Kelly from Women for Water Partnership and Mr. Steve Roese, President of Water is Basic. They all elaborated on the nexus of gender and water and the importance of addressing these topics in the sustainable development goals and the post 2015 development agenda for the improvement of lives in South Sudan and throughout the world.

The access to safe and clean drinking water is a human right, yet millions worldwide do not have access to potable water. In many societies, women and girls have the main responsibility to fetch water for household purposes where they walk several kilometers a day for a few buckets of water. According to UN-Water, women and girls spend up to six hours a day fetching water.[1] The safety of these women and girls is often at risk, and the amount of time they spend fetching clean water can and should be used for more productive activities such as the pursuit of education, income generations and more. For these reasons and others, it is important that the international community do more to ensure equitable access to water.

The evident nexus between gender and water suggests that the importance of accessible and clean water has to be included in the sustainable development goals as well as the post 2015 development agenda.

Women and Water in South Sudan

The event began with a screening of the documentary “Ru,” which means water is life. Produced by 'Water is Basic', the documentary focuses on a young girl’s life in South Sudan and how she is affected by the lack of clean water and sanitation. Like many women and girls in the world, the young girl walks several kilometers a day to fetch water. Once a water well is drilled in her village, her life changes dramatically. The time she previously spent fetching water she can now spend at school. The documentary shows how something as basic, yet essential, as access to clean water can make a difference in the life of a young girl and her community.

Following the screening, different panelists spoke. Ambassador Francis Deng elaborated on the negative effects unclean water has on health and presented the many challenges families face when they lack access to clean water. It directly correlates to the lack of education and the rising number of sexual harassment cases.

Then Ms.Robinson engaged the audience in a call to face reality with a statistical presentation on sanitation, hygiene, health, education and dignity. "We have to take a hard look at reality," she said and went on elaborating on gender inequality as another reality to be faced: "In many regions of the world, poverty unfortunately has a woman's face." 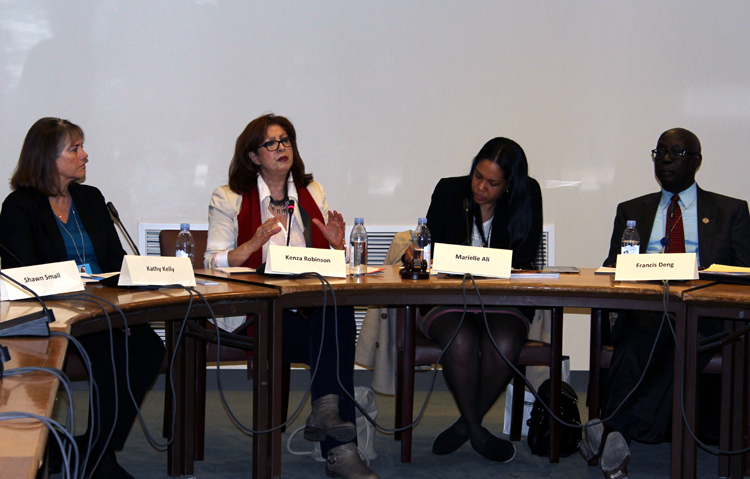 Ms. Kathy Kelly from Women for Water Partnership built on that point by stressing that "Women are the agents of change.” And lastly, Mr. Steve Roese the President of Water is Basic summarized his thoughts briefly and passionately, saying: "I predict that no matter what the technology, it won't change until women lead the change."

Concluding the event, Mrs. Deborah Fikes, WEA’s UN Permanent Representative, said: “The World Evangelical Alliance was honored to be able to host a side event at the CSW this year and focus on the impact that access to clean water has in women’s lives in developing countries. Access to clean water is a basic human right that faith traditions must prioritize as part of our advocacy efforts which we will better enable us to love our neighbor as Christ commands us to do.”


For more information on the Commission on the Status of Women, click here.