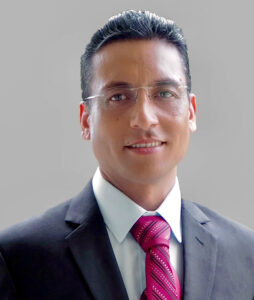 Thir Koirala was born into a well-educated, politically active Hindu family in Nepal. From his childhood onward, he has personally experienced conflicts in family and society. Thir was involved in politics during his student life and has learned how to win others by playing dirty games. After receiving Christ in his late teens, he realized that he wanted to be a peacemaker not a divider. As a journalist he learned to closely know different kinds of conflicts from personal to national level.

Thir served as a pastor for nine years in East Nepal. He played vital role to unite diverse different denominational churches and formed an NGO for working together. This provided an example of reconciled united initiatives in the community.

He has been working as a national coordinator of Micah Nepal since 2009. In his leadership he ran different movements and campaigns on forgiveness and reconciliation, mediation, Integral Mission, anti- corruption etc. He is a key player on the peacemaking process among the inter-religious groups in Nepal. He has started to train and mobilise new mediators (Community Peace Makers) to establish peace in religious groups and on community and political level. In his journey as a peacemaker, the Lord Jesus gave him a clear vision and the goal to work at a wider level in peace and reconciliation ministry. After meeting Prof. Dr. Johannes Reimer and discussing the peace and reconciliation ministry of WEA PRN, he saw this as the calling from God in his life to establish a peaceful community in Asia and beyond.

PRN Asia is developing a peace builders’ network and sets an example of a reconciled community. In coordination and collaboration with like-minded peace building originations, mission agencies and peace agents, PRN Asia works together to establish peace in personal life and communities. The aim is not to develop peace makers on a social level but help believers to become a true disciple of Jesus and be like him in processes of peace and reconciliation. PRN Asia envisions Peacemaking in Asia as a process for the whole life and as a lifestyle rather than a project. The goal is to journey with people through spiritual, intellectual, physical/economic and social/emotional transformation.

Manuel Böhm, Director of Network Development of PRN about Thir: “Thir Koirala has become a crucial part of the regional coordinators team of PRN. His experience to help churches become agents of holistic mission in their community beyond Nepal brings an important contribution to the Church in Asia. Thir’s expertise from various fields and his networking skills contribute to building a united voice for peace in the region and establishing Evangelicals as key players for a reconciled Asia.”

More on our core strategy and network initiatives at: wea.peaceandreconciliation.net

Japanese Christians Pray for Mission Opportunities in Olympics without Spectators