The Church shining in Ukraine

The scene in Ukraine remains sinister:

Since the outset of the war, local churches in Ukraine and neighboring countries responded immediately to serve and help those in need. Ukrainian churches began rescuing civilians from combat zones, sheltering them in churches and homes. Initially many pastors and believers resorted to using their own money to feed and care for these refugees. Early in the war, the WEA responded by connecting with established partners in Ukraine to fund this important work.

For months now, Ukrainian churches have relocated refugees to safer areas and ferried them to borders. Across the border, churches from neighboring countries are meeting these refugees and helping them resettle.

The needs go beyond the basics of:

These churches are working to provide psychological care and space to cope with the trauma. With help from the global Church, they are collaborating with professional psychologists to offer needed support.

The needs evolve constantly, but the Church is unrelenting in her response.

Yet, the scale of this humanitarian catastrophe is beyond anything Europe has seen since WW2. Most churches were not set up to run their facilities 24/7 and are facing high energy bills. Many of the churches are feeling overwhelmed trying to keep up with the ongoing needs.

Donate to help the churches that are directly responding.

Read our latest situation report on the war and the WEA’s response.

Read examples of how Evangelicals from around the world are supporting our brothers and sisters in Ukraine and Eastern Europe: 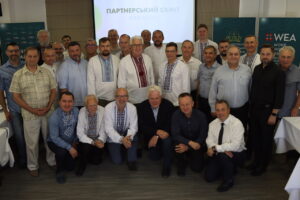 Ukrainian fortitude and resourcefulness has repeatedly shocked the world over the past six months. This is not just true of their military, but the people, 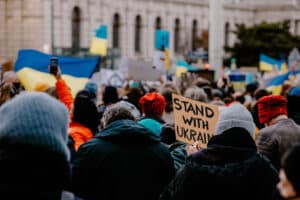 For four months, the suffering and inhumanity of war have devastated Ukraine and her people. Nearly 5 million people have fled the country since Russia

Ukrainians Risking Their Lives to Serve Others

On February 24, a full-scale invasion of Ukraine began. Russian troops began shelling civilians, saying that they were saving Ukrainians from neo-Nazis, whom we could