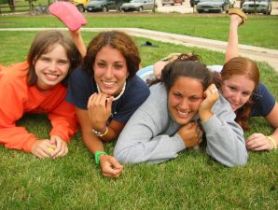 The best way of sharing Christian faith is through relationship, according to new research from the Evangelical Alliance UK. Its survey showed that 81 per cent of Christians have seen 'friendship evangelism' work effectively.

The survey, Confidently sharing the gospel?, set out to find out whether Christians are still evangelising in the 21st century, but found changing patterns in the way that Christians speak about their faith.

It also revealed that today's Christians are unlikely to be found preaching in the open-air, with only nine per cent feeling that street preaching is an effective way to talk about Jesus. Eighty per cent find the intimacy of a group of friends is a safer and more effective place to share their beliefs.

Krish Kandiah, director of churches in mission at the Evangelical Alliance, said: "It's no surprise that the good news about Jesus is best communicated in friendly conversation. Jesus modelled confident graciousness to his Church. He was not afraid to explain the gospel, but he did it in a winsome, engaging way. Let's continue to walk in his footsteps."

Other results from the survey:

The survey is available online at: http://www.eauk.org/snapshot, where hard copies can also be ordered.

The aim of these surveys is to provide churches and Christian organisations with the type of data that will help them better understand and work with the communities they serve.

Previous issues in the series are: A snapshot of the beliefs and habits of evangelical Christians in the UK, Does belief touch our society?, Are we communicating?, The World on our doorstep?, How's the family? and Does Money Matter?