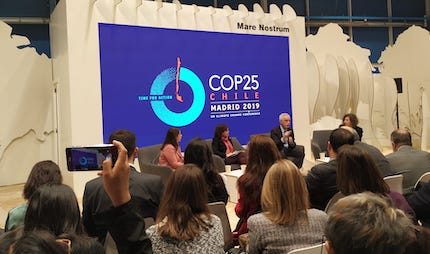 The summit brings together over 25,000 delegates from around 200 countries from December 2 to 13, and seeks to bolster the Paris agrrements. “We need a rapid and profound change in the way humanity does business, generates energy, builds cities, moves and feeds itself,” UN Secretary General, Antonio Guterres, said at the opening ceremony.
He called participantes to “secure more ambitious national commitments, particularly from the main emitters, to immediately start reducing greenhouse gas emissions at a pace consistent to reaching carbon neutrality by 2050”.
PARIS AGREEMENTS TO BE FULFILLED IN 2020
COP25 is the last UN Climate Summit before 2020, the year when the Paris agreement comes into effect, and many nations must submit new climate action plans before the next meeting in Glasgow.
Under the 2015 agreement, more than 200 nations committed to keep global warming to well below 2 degrees Celsius above pre-industrial levels and, if possible, to less than 1.5 degrees above. They also agreed that global emissions of greenhouse gases must peak in 2020 at the latest, and then start coming down. 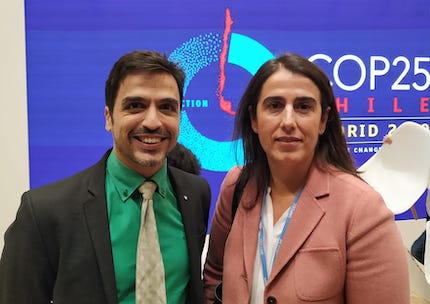 SPANISH EVANGELICAL ALLIANCE PARTICIPATES IN COP25
Thanks to the participation of the WEA in the Human Rights Commission, the Spanish Evangelical Alliance (AEE) was declared to be of interest by the Spanish Ministry of Foreign Affairs, which invites it to various events at the summit.
A roundtable about human rights, drinking water and sanitation was one of the main event on Tuesday at the COP25. The evangelical entity, representing the World Evangelical Alliance (WEA), was invited to this event. Emilio Carmona, member of the AEE board, participated in the roundtable. 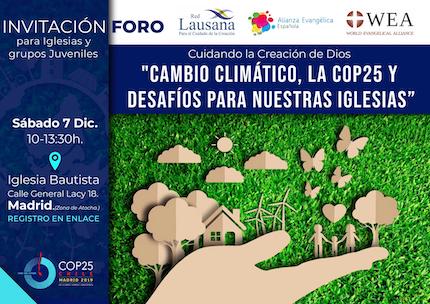 WATER CHALLENGES: SANITATION AND PURIFICATION
The speakers were Leo Heller, UN Special Rapporteur on the human rights to safe drinking water and sanitation; Carmen Castiella, director of Cooperation with Latin America and the Caribbean of the Spanish Agency for International Development Cooperation; Celia Fernández, professor at the Polytechnic University of Madrid; and Adela Díaz Bernárdez, Director of the Human Rights Office of the Ministry of Foreign Affairs, EU and Cooperation.
Heller explained that climate change hinders access to international right to drinking water and sanitation, so that “the climatic emergency does not affect everyone equally.” He also warned about the danger of lack of sanitation in regions such as Latin America, where greater investment is needed to prevent the spread of diseases. Castiella underlined that the UN recognized the priority of improving access to drinking water and sanitation in 2015, considering how it affects the most vulnerable groups.
Meanwhile, Fernández stressed that the main guarantor for these rights to be fulfilled, “regardless of the population” is the state, “the one to whom we must ask for responsibility”. Adela Díaz recalled that a better management of drinking water is among the objectives of the 2030 climate agenda,and that “Spain and Germany have played a key role in promoting the recognition of these rights since 2006″. T
he reforestation of species that protect water resources, a greater investment in the purification and reuse of the water, and to obtain renewable energy at different stages of the water cycle, were some of the solutions proposed. It was also pointed out that the experience of countries like Spain in desalination and wastewater reuse, would be useful for Latin American countries where there is still very little investment in these issues.
EVANGELICAL FORUM ON CLIMATE CHANGE
In the midst of the COP25 in Madrid, the Spanish Evangelical Alliance, the World Evangelical Alliance and the Lausanne Creation Care network, have organided the forum “Climate change, COP25 and challenges for our churches”.
They have invited “the evangelical churches of Spain, its members and youth groups”, to a meeting on Saturday, December 7, which aims “to provide a theological basis regarding creation care, and give a biblical perspective on the climate crisis and the COP25 in Madrid: why is it important for us as believers, and what do we have to do as a church?”
The organisers also hope to “provide opportunities for fellowship, exchange of ideas and prayer between believers who advocate for the climate”.
By Evangelical Focus ]]>