Interview with Dr. Reinhardt Schink of German Evangelical Alliance on “Peace in Europe”

“Being a peacemaker is a basic calling of Christians” 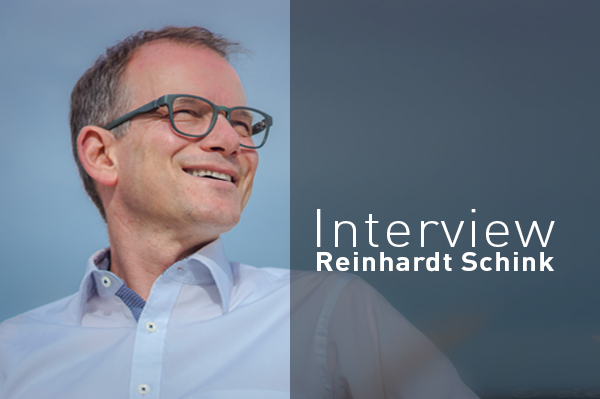 To what extent is 8 May 2020 a significant date in Germany and Europe?

I believe that 8 May is indeed a very significant date, for Europe as a whole but especially, of course, for Germany. A terrible war with infinite suffering started in Germany and as diverse as the perspectives on this date of the end of the war may be, there is no question across Europe that after many years and infinite suffering an unjust regime came to an end.This is a reason to be grateful. A totalitarian regime with an inhuman ideology did not have the last word.

At the same time, 8 May is also a date that reminds us that peace cannot be taken for granted. Nor can it be taken for granted that we can live in a free and democratic order. Racist and anti-Semitic ideas are not automatically banished forever. Every generation must find a new yes to our Christian values. Just as charity does not shape our society without own efforts by every member, hatred, egoism and populism are continuous challenges. It all depends on the foundations on which we live our everyday life, on the standards we set ourselves and the spirit that guides us. 8 May painfully reminds us that totalitarian regimes, which make man the measure of all things and which themselves want to set the standard for right and wrong, do not create paradise on earth, but hell. The rejection of such dictatorial regimes and their life-destroying ideologies is a common ground in Europe that must be fought for over and over again. 8 May is a warning to all of us that totalitarian, inhuman ideas have no place in a society. We must always recognize anew: Peace doe not come automatically. Peace requires constant efforts to reach out to one another. Particularly in our current situation in Europe, we are called to work for peace again and again and not to take it for granted.

As part of “Together for Europe” you yourself were involved in an important Christian movement. How did it come about and what have you achieved?

First of all, it is important to me to emphasize that people from all over Europe and from very different Christian backgrounds have been involved in “Together for Europe”. The movement was thus not limited to the evangelical movement but included many different Christian movements and communities across all denominations. “Together for Europe” was created by Christians who recognized that many impulses for a united Europe originally came from the Christian faith. That the people who worked at that time after 1945 to ensure that impulses for unity emanated from Europe and that peaceful coexistence would be possible in Europe, that these people had a deep Christian spirituality. Their faith was not separated from politics, but their faith in Jesus Christ was the basis of their political work.  This was a dimension that the “founding fathers” of “Together for Europe” rediscovered in a completely new way.

Some questions have arisen from this impulse: What can Christians contribute for Europe to keep its soul and that in all diversity a successful togetherness is possible? What responsibility do Christians have? And what are the aspects that only Christians can bring into this European structure? The whole movement was thus an expression of a social responsibility and a political dimension of the Christian faith.

The decisive factor was the recognition that Christians are people who, in the first instance, do not define themselves through demarcation, but through a common basis and a common confession. And this confession is: Jesus is Lord. HE in the middle is enough. On the basis of this common confession, we also tolerate great diversity and difference. It is all right if there are different concretisations and forms of expression as long as we stand on the common ground that has already been laid: Jesus Christ.

Another insight was that peace is threatened where excessive egoism is given space and where one suddenly defines oneself only in opposition to the other. There, where only one’s own interests are ruthlessly enforced, injuries and mistrust thrive and the binding forces of society dissolve.

These insights were important messages, important attitudes, so that living together in Europe can work. In my view, it is the task of Christians to bring these messages into the political discourse.

What activities and initiatives have emerged from these findings?

First of all, there were steps to meet each other, to perceive and get to know each other. To give the other the possibility to get out of prejudices, categories of thought and pigeonholes into which one had always put him. And then, in this perception, to suddenly realize what treasure God entrusts to us through these other movements. I am not talking about a naïve denial of differences or a rapturous fading out of the effort that the strangeness of the other can cause me. Paul was right when he spoke of unity, again and again, in terms of “striving for unity”. And yet: to acknowledge what diversity and beauty there is. Many insights and expressions of the faith of the other may be foreign to me, and yet I may find that, nevertheless, the same heartbeat sounds in the other.

Ultimately, this was expressed in the fact that “Together for Europe” formulated “Eight YESes” to Europe. The main question was in which areas of society the communities associated with the movement say Yes to Europe and what they want to contribute to this Yes. Personally, for example, I was very strongly involved in a working group that was concerned with the “Yes to a just economy”. An economy that serves the welfare of the people – and not the other way around.  In working on this question, the different perspectives became clearly apparent, between different denominations, between practitioners and academics, between northern and southern Europeans. Between liberals and opponents of globalisation, between protagonists of a supply-oriented and representatives of a demand-oriented policy, between… The list could easily be continued. So many differences, which by no means could all be attributed to different theological insights. Given these differences, it was simply good to share and understand the different points of view in the first place. Depending on how the different backgrounds were, with regards to some questions we also simply had to say: OK, we will engage in the political discourse with different emphases on this point. This does not detract from the Christian witness, but it is an expression of responsibly lived democracy. And that is not bad, but good. Because democracy lives from it.

What have you learned about peace during this time?

For me, the first decisive question was: What is the foundation on which Europe can really be built so that peaceful coexistence can be achieved? And here I find the insight very exciting, which is again gaining enormous relevance today, that a Europe that defines itself strongly through its economy does not necessarily guarantee peace.  In the business world, just as on the political stage, we are currently experiencing a kind of unvarnished selfishness that has become socially acceptable. And unfortunately, we are also experiencing how much such selfishness, which puts its own interests above everything else and behaves ruthlessly, can destroy a community.

I find it a tragedy that – when the European Constitution was being discussed – it was not possible to include a reference to God in the preamble. That would have been a different basis in contrast to simply saying that Europe is the guarantor of economic growth and that a good economy holds everything together. What we are seeing very clearly at present is that this explanatory statement falls short and that there must be another explanatory statement that goes far beyond the economy and beyond the individual.

The Second World War is also an expression of an ideology in which people put themselves first and may determine for themselves what is right and wrong. An ideology in which man takes the place of God. Then, however, not peace and freedom but totalitarian systems, dictatorships and death arise. Therefore, my great conviction is: If this togetherness in Europe is to succeed, then we need reasons and common ground that lie beyond the individual human being. It needs mechanisms and convictions that keep such egoism in check and tame it.

How is the Evangelical Alliance in Germany dealing with the theme of peace in this special year?

First of all, I am very grateful that there is a working group on peace and reconciliation within the Evangelical Alliance in Germany. And I am especially grateful that this is not a purely German working group, but that its founding history is embedded in a worldwide perspective. From my point of view, it is absolutely necessary that in this kind of working group one not only thinks small and national, but really draws the big lines. That is why I find it very valuable that this working group also has a connection to the World Evangelical Alliance, so that it can always come from the big perspective.

To be peacemakers is a basic calling of us Christians. So, it is good and important to give this point special consideration and celebrate it this year. But it is important to us that this special year has no fig-leaf function and that afterwards one goes back to the agenda and that the topic of peace falls behind. Peace is a continuous task! As Christians we are called to be peacemakers and to work for a just peace all the time. For a lifetime! In doing so, both the horizontal dimension – between us human beings – and the vertical dimension – between human beings and God – must be taken into account. To live peacefully in all dimensions of being human. A challenging task and a dignity at the same time.  What are aids for this? What good experiences have other countries made in peace work that we can profit from? What are methods of understanding between countries, but also between different population groups within a country? Clearly, this is not something that can be achieved within a commemoration year and we can then turn back to the day-to-day business. It is an ongoing task.

When we think of all the tensions that we are currently experiencing in Germany, I wish that we would come together within our country. That those forces that tend to drift apart do not win. When we think of the issue of “Hate Speech”, for example, we need a strong, conciliatory signal for peace.

Furthermore, I think it is very important to get the whole issue of peace work out of the party-political perspective. We must not say: peace work is rather done by left-wing parties , so I do not want to have anything to do with that. On the contrary, we must recognise that peace, especially in the light of these dramatic events 75 years ago, is an issue that concerns all of us, irrespective of our particular political views and opinions.