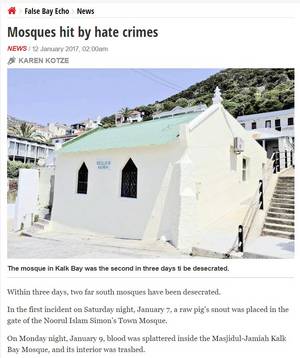 Prof. Dr. Christof Sauer, head of the Cape Town office of IIRF, added additional context in a manner that repudiates any legitimate Christian motivation for desecrating holy sites or institutions of other faiths: “The major representations of global Christianity, namely the World Council of Churches, the Pontifical Council for Interreligious Dialogue, and the World Evangelical Alliance, have in 2011 unanimously given recommendations for conduct in a document entitled ‘Christian Witness in a Multi-Religious World.’ It is foremost a peaceful and respectful witness acting in God’s love, imitating Jesus Christ, and adhering to Christian virtues: ‘Christians are called to conduct themselves with integrity, charity, compassion and humility, and to overcome all arrogance, condescension and disparagement.’ ‘Christians are called to reject all forms of violence, … including the violation or destruction of places of worship, sacred symbols or texts.’ The reported acts fall far outside these standards, by which Christians want their actions to be measured.” Sauer added, “Looking at the global scene, we note with concern that my acts of violence are committed against adherents of religious minorities, their institutions, and symbols, in contexts where Muslims form the majority of the population. May we express the wish that our Muslim friends in South Africa publicly decry such acts and exert any possible influence, just as we do in their case?”