One afternoon on December 10, 2013, a group of young men from Lakounga, a suburb in the Central African Republic’s (CAR) capital, Bangui, sought out to destroy neighboring shops owned by Muslims. Upon hearing of the attack, one of the local parish’s Catholic priests countered the adolescent men, and with the help of fellow neighbors, persuaded them to refrain from attacking the Muslims stores, a peaceful gesture between faiths largely uncommon in the embattled country.

In other neighboring towns, a myriad of posters plastered on various street corners capture CAR’s Archbishop Dieudonne Nzapalainga talking with an imam. Underneath the picture, a sentence declaring, “Christians and Muslims, the same blood, the same life, the same country.”

These small steps towards peace are the reverberations of the revolutionary peacekeeping efforts of Reverend Guerekoyame-Gbangou (President of the Evangelical Alliance), Archbishop Dieudonne Nzapalainga (CAR’s Catholic Archbishop), and Iman Omar Kobine Layama (President of the Islamic Council). The three religious leaders birthed an interfaith relationship to combat the tumultuous environment in the Central African Republic. In 2013 they agreed to act together to address the growing unrest in the country. The leaders promoted dialogue between Evangelicals, Catholics and Protestants to avoid further violence and revenge between believers of the religions. They traveled throughout the country to encourage civilians and create a peaceful environment. Furthermore, the trio was invited to travel internationally to meet with various government officials, and speak on the turmoil in CAR, an offer that usually isn’t extended to religious leaders. Their international lobbying led to MINUSCA, a UN peacekeeping mission organized for CAR. A country consumed with senseless violence and discord is now hopeful for better days, partly due to these three men. And now, they are being awarded the prestigious Sergio Vieira de Mello Prize for their historical national and international influence to promote peace. 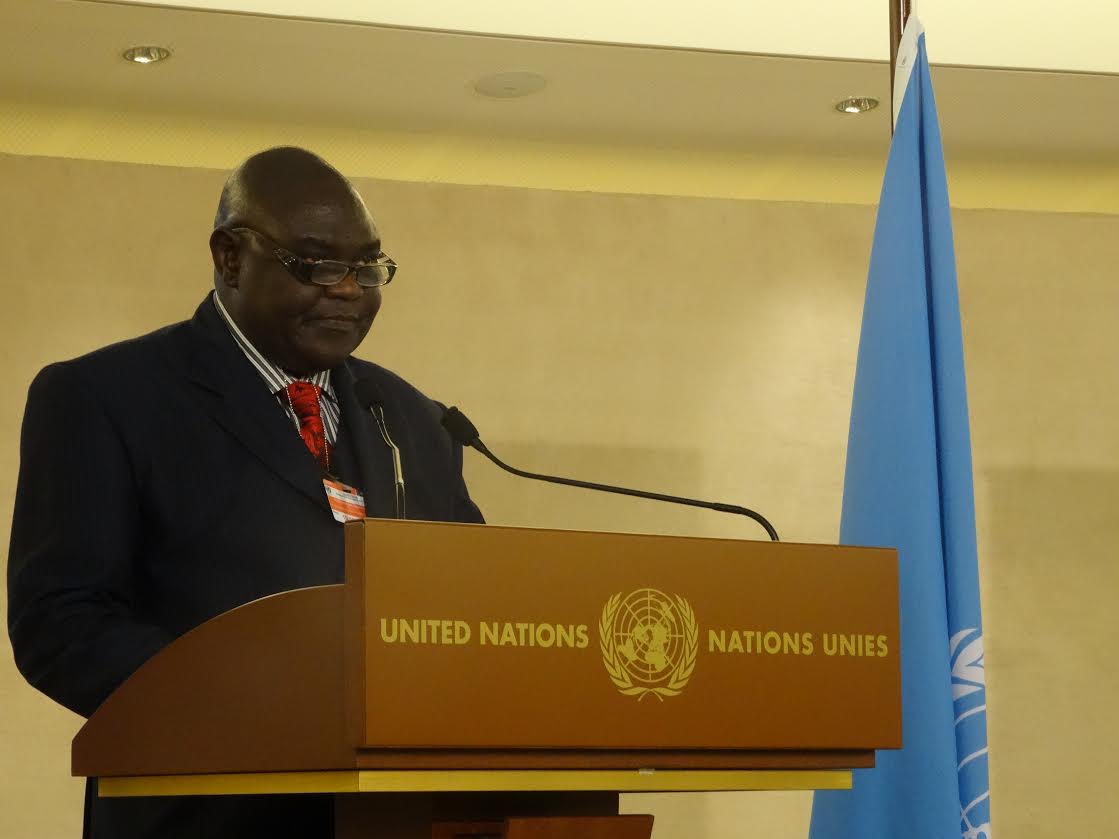 Possibly the most interesting fact surrounding the leaders’ work, is that the unrest in the Central African Republic did not begin due to religious disputes. From the very beginning of CAR’s history up until now, the tension has mainly been a political one. After gaining independence from France in 1960, the country saw seven presidents removed through a coup d’état, creating an atmosphere of political instability. Francois Bozize, the current president who received the title after violently removing his predecessor from power, suffered the same fate. After Bozize became president, a rebel group named Seleka, a coalition comprised mostly of Muslims, started to attack Bangui. The leader, Michel Djotodia, overthrew the weak government and became president, dismantling the constitution and demolished the country’s national assembly. Under his rule, looting clashes and other atrocities overwhelmed the country. Djotodia was unable to pay Seleka, so the violent group ignored his command to stop the violence and continued on with their criminal self-interests. It was from this standpoint that anti-Balaka, or “anti-machete” formed, a group with most of its members from the Christian faith. This led to each group killing and harming people from the other religions. While religious leaders publicly noted that not everyone in these groups was attached to a belief system, the disparity was already too wide. Many believed and saw the tension between the two faiths. Civilians were targets and thousands were killed, almost a million were displaced as a result of the violence. But for most of CAR’s history, people from different backgrounds have lived in peace. The issue was never really a religious one but rather ethnic patronage.

Wanting to halt the violence between the groups and encourage a peaceful atmosphere that CAR had long been yearning for, Guerekoyame-Gbangou, Nzapalainga, and Layama set out to campaign for reconciliation within the CAR. Together they formed an interfaith platform and first met with locals in remote villages to promote tolerance and peace. The interreligious delegation encouraged prayer and friendship with people from the CAR and other countries. The men, who belong to three different faiths, were often photographed together, providing visual evidence of friendship and trust between the leaders. In March 2013 while visiting Bossangoa, a Muslim leader named Imam Layama was too afraid to step out of the car out of fear of an attack. Reverend Guerekoyame-Gbangou stood next to Layama and called him his brother, a true sign of respect and love between the two. Christians made the effort to create bonds with Muslims, and reports revealed that Muslims would find shelter within a church whenever militant Christians moved to harm them.

The efforts of the three men garnered international attention from political leaders. Though the chaos was more a political one than a religious dispute, leaders were astonished and inspired by strides the men created within the country. They were soon asked to speak in front on the UN Security Council in Geneva to explain and petition against the plight of the civilians in CAR. The harrowing details of bloodshed and brutality presented in front of the United Nations led to MINUSCA, a UN mission that was deployed to CAR to police the area and create meaningful policies to end the violence. On March 13, 2014 the UN Secretary General Ban Ki-moon met with the men to discuss their work in CAR, which he described as a “powerful symbol of their country’s longstanding tradition of peaceful coexistence.” The U.S. State department sent an interfaith group from the US, including the president of the National Evangelical Alliance, organized by the United States’ UN ambassador Samantha Powers. The level of attention this interfaith platform received only soared from there, all the way to the United State’s capital. In Washington D.C., government leaders became aware of the CAR trauma, which prompted the Secretary General of Religions for Peace, Dr. William Vendley, to organize a mirror visit to the CAR. Their work even caught the eyes of President Barack Obama. During an address to African Union Headquarters in Ethiopia, of the CAR dilemma, he said, “the spirit of dialogue recently shown by ordinary citizens must be matched by leaders committed to inclusive elections and a peaceful transition.”

The World Evangelical Alliance is heavily intertwined with the success of this interfaith platform. Reverend Guerekoyame-Gbangou is the President of the Evangelical Alliance. The WEA demonstratively created an environment of peace and welcoming to the Muslim community. The Alliance of Evangelical Churches in CAR, WEA’s national member body, has been working together to halt the violence, ease the tension, and reconcile local communities. 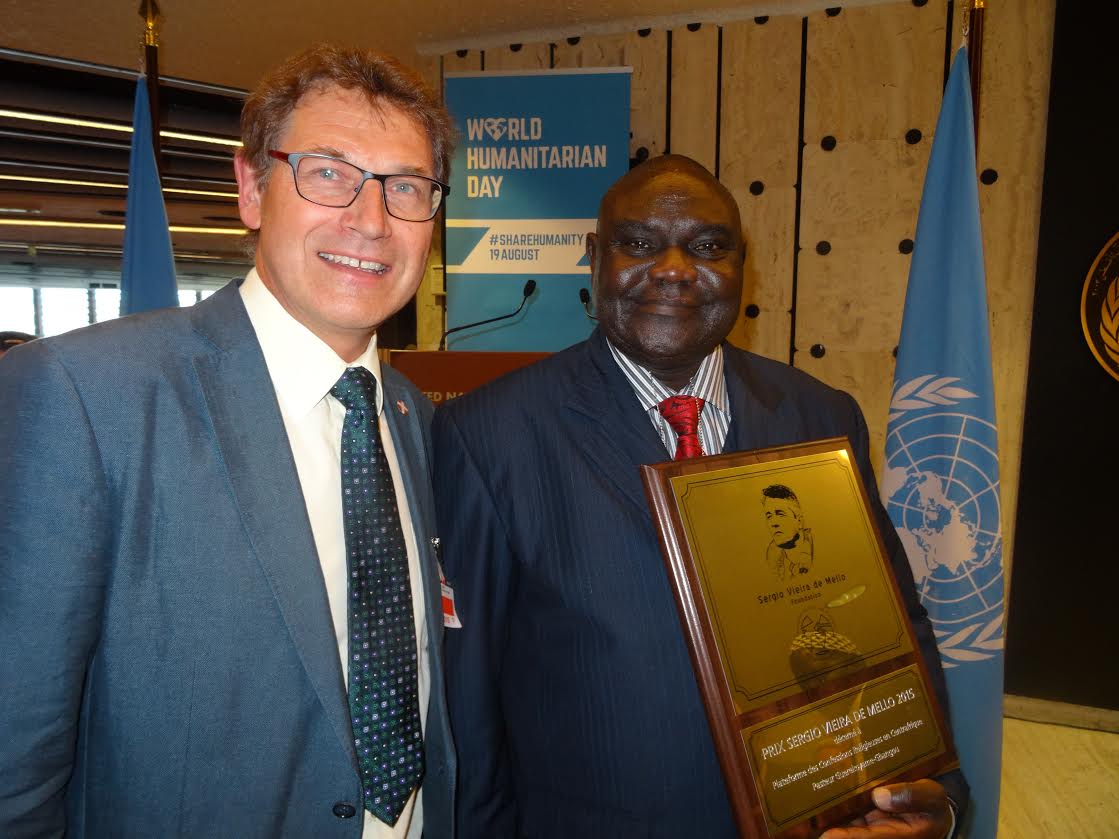 This historical partnership between the leaders has led to numerous international accolades and praise. In 2014, TIME magazine featured them on its list of 100 most influential people, in the pioneer section. The article reiterates the men’s ability to act precisely in the manner in which their respective religions tell them to: with sympathy and respect. And today, the men will be honored with the Sergio Vieira de Mello award. “It is most fitting that these men receive this award, named after Mello’s memory, a UN Secretary General killed in an UN compound bombing in Baghdad on August 19, 2003,” says Albert Hengelaar, World Evangelical Alliance’s UN Geneva Advocacy Officer. “Mello believed-and worked towards-peace and reconciliation among conflicting people and parties.” The violent conditions surrounding his death are very similar to the ones endured by the people of CAR.

Reverend Guerekoyame-Gbangou, Archbishop Dieudonne Nzapalainga, and Iman Omar Kobine Layama penetrated a message of peace within the Central African Republic in ways that most leaders would struggle to even begin. And while their efforts will be remembered throughout history and used as a new foundation for the war torn country, there is still much work to be done. But the actions of the platform reinforced the social fabric of the country. This is very important for the CAR, as it provides the country a sense of unity, at a time when the sentiment is often scarce.