It was a two hour drive north of the Cambodian city of Siem Reap. The first hour was fine, then backroads, mud holes and wandering cattle. As we drove, Reaksa described the field where his family spent their first night in 1975. Driven by the newly rising communist party the Khmer Rouge, with only three days of food, they were forced to find a place to sleep out in a field. Over the next weeks, because his father was a teacher, the family of seven were forced-marched, eventually ending in the town of Kokpreach.

We drove into town, stopping first at the school Reaksa had built out of profits from his first book, “The Tears of My Soul.” Then we slowly drove down the only road, houses on each side, curious eyes staring out from houses on stilts, built in order to escape from monsoon floods. (We call him Reaksa. His full name is Sokreaksa Himm.)

I wanted to visit this village with this young man whom I had come to know while serving as president of Tyndale. Reaksa had landed in Canada and ended up doing his undergraduate studies at Tyndale, then moving on to Providence near Winnipeg to complete his masters.

“The killing fields” of Cambodia ring as foreboding as “The ovens” of Auschwitz. In four years — 1975-79 — three million Cambodians were killed, with many dying from starvation. The educated and city dwellers were “re-educated,” forced into the countryside to work as manual laborers, much like the Red Guard did to professionals and urban dwellers in China under Mao. A taxi driver told us of his family. When asked how long he was forced to live apart from his parents, he recited, “Three years, six months, twenty days.”

Starvation was endemic. Disease swept through the camps. Children died without food. What caught my attention was a rough draft of a manuscript by Reaksa I was asked to review in my early days as president in 1995. As I read, I felt chill after chill as the story unfolded. It was beyond what I thought a human could do to another, and way past what one could endure.

It was the story of Reaksa Himm, as told in “The Tears of My Soul.” 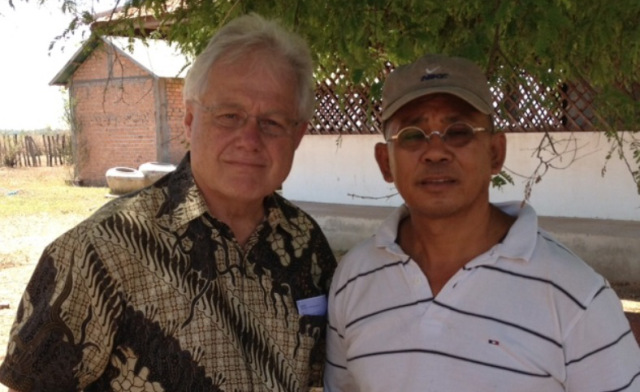 As a boy of eleven he and his Cambodian family were forced-marched from their home out into the rural area to work in farming. At eleven he watched as the villagers hacked to death his father and brothers and later his mother. Lying under dead bodies in the pit in which the killers had dumped their victims, he waited until they left. It is a harrowing story of survival, in ways which seems only a Spirit-protected could survive.

Eventually crossing the border to Thailand Reaksa was sent to Canada. Here World Vision cared for him at one of their refugee centers and led by Chuck Ferguson, Reaksa turned in faith to serve Christ. From there, under Dr William Wong, then Dean of Tyndale, Reaksa studied, preparing himself for ministry.

However, plaguing his young mind was not only the memory of his family now dead — with the exception of his sister — but feelings of revenge for those who had so devastated his family and life. His early journey of survival was now into its next phase. In “After the Heavy Rain,” he tells his story. Let me allow him to describe what he was going through.

“I could tell that something was wrong with me, and underneath the facade I suddenly realized that I needed to forgive totally. Forgiveness is not easy, but if I allowed the big ball of fire to keep burning inside my heart, my life would not be worth living. . . When I could not forgive, I was actually burying myself into the grave of bitterness, anger and hatred.”

Determined — as I have found him to be — he returned to the village of Kokpreach and there met with the man who killed his father, the one who killed his mother, and taking a Cambodia scarf tied it around their necks as a symbol of forgiveness. Then he gave them a Cambodian Bible and read from Luke 23:34 — “Father, forgive them for they know not what they do…” — and in so doing, offered his forgiveness.

We drove to the end of the village, turned around and parked. We approached a house where a woman was sitting. A man, in his early sixties, walked up and smiled. “These are my adopted parents,” Reaksa said. After his family had been slaughtered, this man offered him protection and a home. Reaksa lived with them, going to school until he could find his sister and return to his family home in Siem Reap.

While visiting Cambodia, listening to Christian leaders describe how they survived the killing fields and intrigued to learn of their vision for ministry, I wanted to visit with Reaksa, the place where his life was turned into horror and nightmare. I have no way of understanding the inner stress such a life-experience brings to a young boy and what it morphs into, when one becomes an adult. But neither have we crept out from under the burden of guilt of survival, anger and hatred of one’s family’s killers and the deep, deep surging river-bed of revenge that — as I learned — characterizes many who lived this side of Pol Pot’s murderous minions.

How does one forgive? I’ve wondered. This was put under a microscope as I sat with pastors in Cambodia and learned that among the pastors and senior church leaders gathered with us for dinner one evening, two had been soldiers in the Khmer Rouge army. Here they were, forgiven by their colleagues who themselves had lost family and loved ones in the massacres. And further, these men had learned to accept forgiveness of themselves, now able to lead others in the brilliance of faith and new life.

Monsoons are an annual event here. Rice fields depend on them. One follows the other, and as Reaksa points out in “After the Heavy Rain,” grace gives courage and strength to move from terrible moments of fear and killing into new ways of seeing self and others.


PS. I suggest you may want to read his two books, “The Tears of My Soul” and “After the Heavy Rain”. To order contact http://www.5kmwalkathon.com/store/books.htm