Global Day of Prayer: Pray for the Elections in Egypt

"Their burnt offerings and sacrifices will be accepted on my altar; for my house will be called a house of prayer for all nations" Isaiah 56:7

For what many say is the first time in history, Egyptians are heading to the polls today and tomorrow for a truly democratic presidential election.

It's been over a year since the nation ousted Hosni Mubarak from presidency. In the time the nation has gone without a definite ruler, poverty has increased from 42% to 47%, and Egyptians are growing increasingly restless. Now all presidential candidates promise a better Egypt.

But who will be able to deliver on those promises? Egyptians will cast their opinions at the polls as they choose between five candidates vying for presidency.

Mohammed Musri is the leading candidate for the Muslim Brotherhood, a group that's been seeking power nearly since its formation in 1928. NBC's Richard Engel says the Brotherhood's slogan is "Islam is the solution," and Islam will thus be looked to in order to guide every governing decision. It would seem that if Musri is elected, Egypt's relationship with Israel as well as the United States could go quickly downhill.

At the same time, Abdel Monein Abu al-Fotouh seems to have claimed the hearts of many young Egyptians. Tom Doyle with E3Partners points out that although Fotouh has declared his favor for Sharia Law, has a decades-long history with the Muslim Brotherhood, and is now being supported by Islamic extremist group the Salifists, he has also made some serious leftist statements, drawing in young people.

Things will only get harder for Christians under strict Islamic rule as well. And yet, the Gospel currently is spreading more than E3 has seen it do in 12 years. Christians will move forward with the Great Commission no matter what is to come.

"Egypt is in a great spiritual battle," says Doyle. "Hearts are open, and hardline Islam is trying to shut that down. One of the best ways they can do that is to get into power. But even if they do, it's not going to stop the believers."

Let's Pray the simple Prayer our Lord Jesus taught us : " YOUR KINGDOM COME, YOUR WILL BE DONE ON EARTH AS IT IS IN HEAVEN" Matthew 6:10 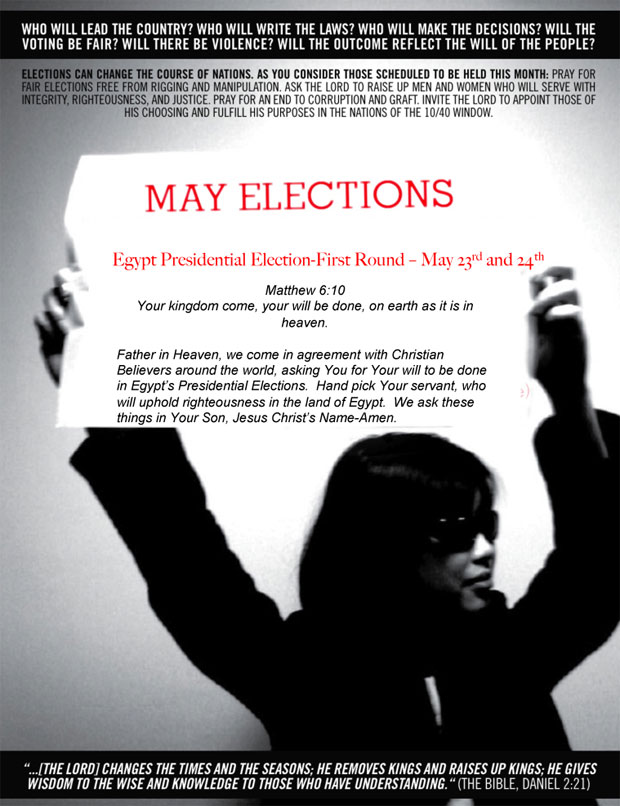