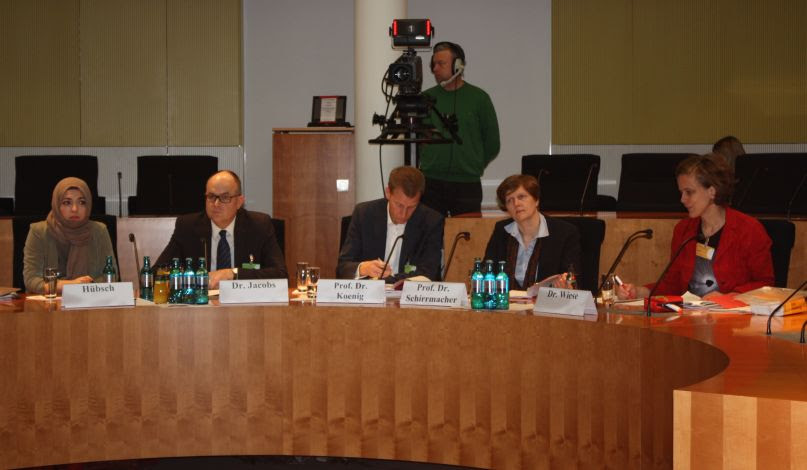 
Schirrmacher named legal discrimination against women as it relates to marital law, inheritance law, and divorce law, among others, as points of conflict between the Sharia and democratic principles clearly seen in Arab states. There is no secular law there, she says. Schirrmacher also sees significant differences with respect to freedom of opinion and religious freedom. According to the norms of Sharia law, both leaving Islam or converting to another religion still carry the death penalty. In Saudi Arabia, North Sudan, and Yemen, among others, this is also the valid and applied law. However, also in countries where “apostasy,” falling away from Islam, is not punishable by death, “there is not a convert who enjoys legal certainty since they are repeatedly publicy condemned to death through fatwas (legal opinions) and to some extent executed in broad daylight by zealous members of society.”

Minorities in countries where Sharia law is characteristic also have to waive certain rights. “Equality between members of the majority religion (Islam) and minorities (Jews, Christians, Baha’i, among others, is ruled out under Sharia law.” As a result, the conflicts between a Sharia-based legal system and liberal, democratic constitutions result from the fact “that the interpretive principles of the Koran were set in the first centuries and since then have counted as uncontestable.”

In order to promote human rights and democracy in countries in the Near and Middle East, Schirrmacher considers European involvement in education, exchange programs, and encounter programs as well as projects on the topic of democracy and human rights as more expedient than “direct intervention.” In Germany it is important to support those “who defend a democratically compatible interpretation of Islam.” As a positive example, She highlighted the approach taken by the Islamic scholar Mouhanad Khorchide from the Center for Religious Studies in Münster.

According to Schirrmacher, it is necessary for Muslims to open an intra-Islamic “pluralistic religious discourse” to make room for different convictions and opinions. From her standpoint as a scholar, who this year was appointed to academic councils of the Federal Agency for Civic Education and the Federation of German Criminal Detectives, Schirrmacher stated that this includes taking an academic and critical look at the history of Islam’s emergence and the person of Mohammed.

From Schirrmacher’s point of view, such grappling with one’s own religion could be “groundbreaking” for Muslims who affirm civil rights and democracy and, at the same time, want to remain true to their faith. However, when imams teach that Muslims can only demonstrate true faith when they distance themselves from the West and its values, this plunges youth into conflict – and possibly makes them susceptible to radical ideologies.