“Powerful Forces Have Prepared to Counter the Christian Presence in India,” Says Report on Persecution


The persecution of Christians and members of other religious minorities in India has intensified even more in the midst of the coronavirus pandemic.
International institutions, such as the World Evangelical Alliance and Open Doors, have denounced the use of disinformation in the country’s media to stigmatise Christians and Muslims.
The Religious Liberty Comission of the Evangelical Fellowship of India (EFI) has recently released its 2021 half-yearly report on hate and targeted violence against Christians in India.
The organisation identifies a total of 145 incidents of religious persecution against the Christian minority, including three murders.

“Powerful forces prepared to counter the Christian presence in India”

According to the report, “Before the year 2021 had reached its halfway mark, some of the most powerful forces in modern India prepared to counter the Christian presence in India, with discussions and statements on how to rid the country of “padri” [Hindi word for Christian priest, pastor or clergy]”.
“The incidents and the threats took place even as the country, still reeling from the impact of the first wave of the coronavirus pandemic, was struck anew by the second wave, which struck the country, particularly the metropolitan cities including the national capital New Delhi”, it adds.
EFI assures that the Prime Minister of India, Narendra Modi and other members of his party, the Bharatiya Janata Party (BJP), “met in a secret conclave with the main agenda of launching a campaign with the slogan An India liberated from Chadar (cloth sheet symbolizing Muslims) and Father (Christian Priests)”.

They explain that, because of that “the violence was vicious, widespread and ranged from murder to attacks on church, false cases, police immunity and connivance, and the now normalised social exclusion or boycott which is becoming viral”.
“Violence against Christians by non-state actors in India stems from an environment of targeted hate. The translation of the hate into violence is sparked by a sense of impunity generated in India’s administrative apparatus”.
Although many churches in India have become leaders in health and social care in their immediate surroundings during the pandemic, evangelicals denounce that there has also been greater impunity regarding the spread of misinformation and violence against religious minorities.

Special impunity during the pandemic

“COVID-19, which has severely impacted data collection, grassroots investigations and even a measure of solidarity with victims in distant villages, seems to have given the police a ruse not to register cases. Access to courts for relief was restricted too”, points out the report.
Furthermore, ”the violence was also facilitated by the absence of civil society on streets as activists were unable to travel because of lockdowns restrictions and because of the collapse of the media”.

False accusations and arrests, the most common incidents

According to the EFI, the most common incidents have been false accusations and arrests (43 cases), threats and harassment (24 cases) and physical violence (21 cases). Three murders, the demolition of three churches and the disruption of up to 14 worship services are also reported.
The regions where Christians are most persecuted in India are Madhya Pradesh (30 cases), Uttar Pradesh (22 cases), Karnataka (14 cases), Chhattisgarh (13 cases), Odisha (12 cases) and Maharastra (11 cases).

The reality of religious freedom can vary greatly from state to state. One example is the application of so-called anti-conversion laws.
“The most alarming development has been the expansion and scope of the notorious Freedom of Religion Acts, which are popularly known as the anti-conversion laws, earlier enforced in 7 states, to more states ruled by the Bharatiya Janata Party”, says the report.
RFI explains that “the laws ostensibly punish forced or fraudulent religious conversions, but in practice, they are used to criminalise all conversions, especially in non-urban settings”.
In its 2018 report, the entity recorded 325 cases, and in the 2019 report it reached 366.
“We call upon the government of India and the respective state governments mentioned in the report to ensure the rule of law and the security of religious minorities in the country”, stresses the report.
You can read the full report here. 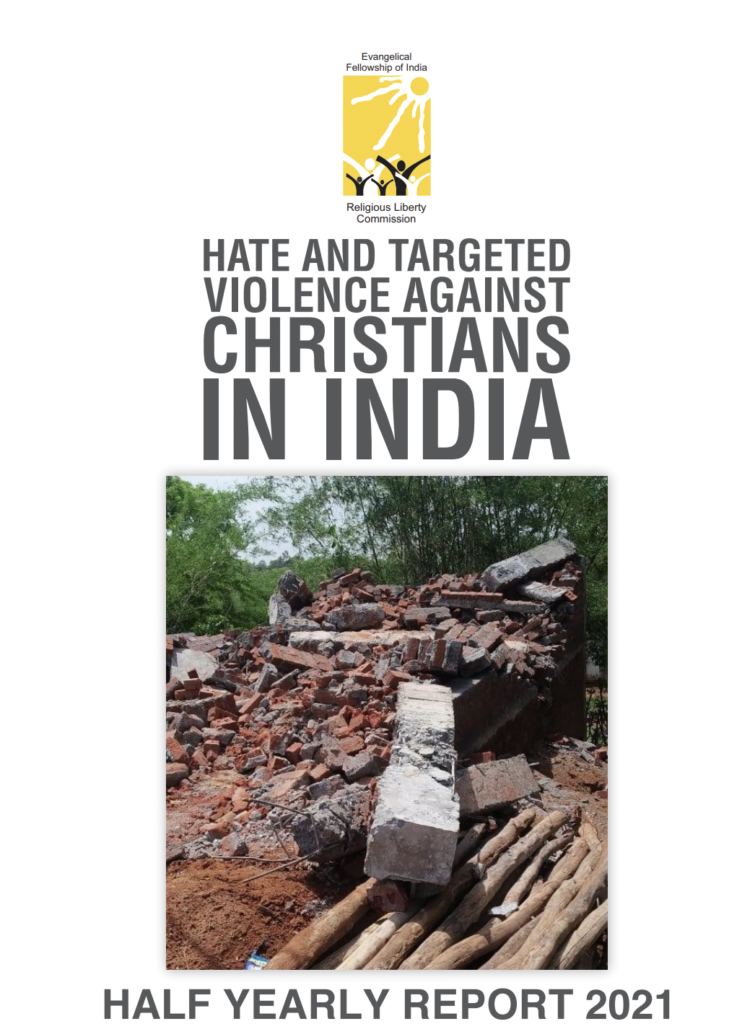 Subscribe
PrevPreviousBeirut, 1 Year After the Blast: “Pray for Renewed Energy to Do the Work”
NextDr. Luis Lacalle, President of the Republic of Uruguay, Met with the CREU Evangelical AllianceNext